Bakeries were experts in the recycling of baseball card sets

Baseball card sets were commonly created and then reused by numerous companies to promote their product. Lots of companies participated in this practice as it saved time and money over what it would have taken to create a new set.

But one particular industry seemed to really take advantage of this convenience — bakeries.

Bread cards and bakery cards (classified as D-Cards) are certainly not as popular as tobacco cards or candy cards. They mostly came in late to the baseball card game, just after the boom of the early 1900s tobacco and candy cards. They were produced in fewer quantities and almost certainly over a more limited time, which makes them much rarer, though. And that has driven up prices beyond those of tobacco/candy cards in some cases.

Bakeries frequently hit up sets that were used by early companies. A great example of that are the D303 cards, spinoffs of candy sets and that were issued with General Baking and also Mothers’ Bread advertisements on the reverse.

Those cards have a familiar look as images in them were used from the E106 and E90-1 American Caramel sets.

It doesn’t stop there, either. The rare D355 Niagara Baking cards are nothing more than overprinted E101 cards. E101s, for the record, are anonymous as the distributor is unknown. But they are are generally considered to be part of a candy/caramel card set and are classified as such. D355s are more crude in nature than the D303s, which had actual advertisements printed on them. These Niagara Bakery cards had only a stamp added to them, which read:

“One of these pictures given with the Tip-Top, Family, Butternut or Homestead Breads. NIAGARA BAKING CO., Lockport, N.Y.”

Strip cards were also a target of baking-related companies. The most common strip cards tied to bakeries are the 1919-21 W514 cards. Most W514 cards are blank but some are found with a unique overprint for Barker Bread.

The Barker Bread cards really come with a sort of disclaimer. They are fairly tough to find and most of them have a good portion of Barker’s advertisements on the back worn off. Most of these appear to have been glued into books as stain remnants are often found on them over the area where the advertisement was.

Other W514 cards have been found with advertisements for Mother’s Bread and Besta Cake products. These seem somewhat related to the Barker Bread cards not only because they are also W514s, but also because they contain the same phrase, ‘Safe at the Home Plate‘ as the Barker cards do.

The W551 strip card set is also another home for bakery spinoffs. Most of those cards are also blank but some have an advertisement for Wool’s American-Maid Bread on the backs.

These strip cards were rare and even determining how many have these back stamps on them is impossible. Further, we cannot even state conclusively if every card in the W514 or W551 sets had these stamps added to them.

Finally, two other sets that are classified as strips are the W573 and W575-1 sets. W573 cards used the same design as E120 American Caramel but were blank-backed. W575-1 cards mimicked the E121 American Caramel set. But similar to the strip cards mentioned above, while those cards also had mostly blank backs, a few have been spotted with, you guessed it, bakery and bread advertisements.

Some W573 cards were used to promote Cream Nut or Goodie Bread. And unlike the other strip cards mentioned, these advertisements explicitly state that 120 cards are in ‘their’ set. Meanwhile, numerous bakeries got in on the act, using the W575-1 cards. Those companies included:

Additionally, Koester’s Bread also used some cards from the W575-1 checklist as part of a limited set. These companies also added their own advertisements to the backs of these previously blank-backed cards. 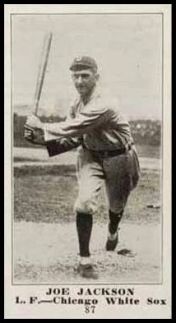 Additionally, it is unsurprising that bakeries also used Felix Mendelsohn’s card sets to promote their products. Mendelsohn was a known producer of card sets that he peddled to businesses to help them advertise.

Mendelsohn is mostly known for producing the popular M101-4 and M101-5 sets. Joe Jackson’s M101-4 card is pictured here. These are commonly called the Sporting News sets but, in reality, they were used by many more companies besides just the Sporting News. And, surprise, some of those companies were bakeries.

In all, we know of four bakery issues that were spinoffs of Mendelsohn’s M101 sets – Holmes to Holmes Bread, Morehouse Baking, Standard Biscuit, and Weil Baking.

On top of the M101 cards, a similar, larger (larger, wider card size) set was long believed to also be issued by Mendelsohn. That theory was seemingly confirmed earlier this year. These cards have a similar look and were issued by several companies, including Collins-McCarthy (E135), a candy company, and plenty of others. Among those were also bakery entities.

The E135-like cards in this set were used by several bakeries, including Merchants Bakery, Weil Baking (again), and Standard Biscuit (again).

Yo Dawg, I Heard You Like Bread Cards so I Put a Bread Card in Your Bread Card

Even when bakery companies did create their own cards, they often were shared among an assortment of brands, similar to T206.

The D304 set, believed to have been issued from 1911-14, is the best example of this. In all, this 25-card set is found with backs for five different companies/brands – General Baking Company, Brunners Bread, Butter Krust Bread, Martens Bakery, and Weber Bakery. All five entities/brands used these same cards with the same pictures.

Similarly, the D359 cards pulled this trick, too. These were cards created to commemorate the Philadelphia Athletics winning the World Series and they were used by two brands — Rochester Baking and Williams Baking. And the D381 cards shared by both Fleischmann Bakery and Ferguson Bakery are yet another example of that practice.

There were several key bakery issues that did use entirely new designs. This isn’t to suggest that every bread card set was uninspired. The fantastic regional Pacific Coast Biscuit minor league sets, D310 and D311, are great examples of some really unique cards. But, in general, bakery issues are probably among the more recycled types of pre-war cards that were produced.