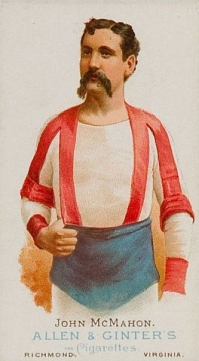 One important distinction regarding Jefferson Burdick and N-Cards is that his American Card Catalog did not classify N-Cards the way that we do today. His book actually catalogued N-Cards as Central and South American tobacco cards. Today, collectors categorize N-Cards as tobacco issues in the 19th Century. That, understandably, has led to some confusion among collectors.

Tobacco cards were popular (and at least one even led to a marriage) but they were also being blamed for causing all sorts of problems related to children collecting them. After a temporary ban on American tobacco cards in the late 1800s, they came back with a bang in the early 1900s with T-Cards.

While some N-Cards are crude in design, many also feature some excellent lithography. Issues such as N28/N29 Allen & Ginter, for example, are considered among the finest trading card sets in terms of the artwork.

Many N-Cards feature color lithography. Some, however, look drastically different. Issues such as the N172 Old Judge baseball card set feature actual sepia-tone photographs that were printed then mounted onto cardboard backing. Many of these types of cards have faded over time, making them difficult to preserve. N-Cards that were similarly produced have a premium placed on them if the images are clear.

Early tobacco cards were incredibly popular with both children and adults. And while ones picturing sports figures were popular, many pictured actresses and unknown women, which were also incredibly popular. Men routinely even pursued women that were pictured on them and at least one relationship that begun as the result of such a pursuit actually ended in a marriage.

Note that this page contains only 19th Century tobacco cards here. Other 19th Century cards appear on other pages and grouped together as similar items.

19th century tobacco cards in America mostly ended in 1897 because a ban on them existed. However, that ban was lifted a few years later, leading to the reintroduction of tobacco issues by the early 1900s. Additionally, no such ban existed in the rest of the world so other international issues were continued without interruption.