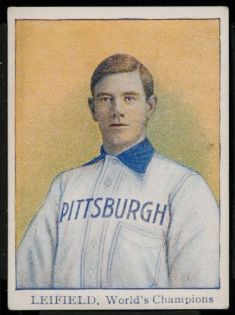 D-cards represent cards from various types of bread/baking companies. These were usually packed in loaves of bread or other baking-related items.

Most issues were relatively standard, but some unique D-cards do exist. The uncatalogued Middy’s Die-Cut cards, cut to the shape of a player pose, were some. Another are the Sawyer Biscuit cabinets that were small photographs mounted onto a frame backing. And the Wool’s American-Maid Bread set was composed of simple W551 strip cards with their stamp overprinted on the reverse.

Most bread issues are relatively scarce by comparison to other more common candy and tobacco cards. These were almost certainly printed in much smaller quantities and practically every bread issue is a somewhat difficult one to find.

Another common theme with bread cards? Many of them stemmed from existing sets that had already been created for other businesses.

Note that some bread cards listed below are considered as parts of other issues. For example, the Barker Bread cards were W514 strip cards with the Barker Bread name stamped/printed onto the backs. Because they were issued by a bread company but also a strip card, I have listed them on both the bakery and the strip card pages of this site.