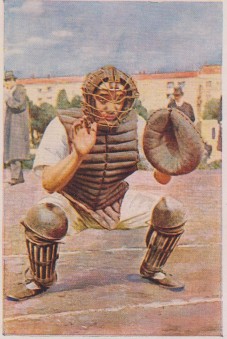 F-Cards represent issues from various food companies. These are mostly later issues that came out after companies discovered the fascination of collectors with candy and tobacco products.

Several issues are not traditional cards, either. The Dixie Lids cards, for example, are actually the lids/tops of ice cream products. The Kellogg’s Pep Stamps are miniature, perforated pictures. The Wheaties Panels are actually the oversized pictures on old Wheaties boxes. Despite that, many of these products have become collectible over the years.

F-Cards come in all shapes and sizes. One unique issue is the 1932 Astra/Sanella set, which was a German multi-sport issue. It covers numerous sports, is larger in size than most issues, and was printed on thin stock for two brands of margarine.

One interesting note is that while the Sweetman Company cards were classified as a food issue (F50), that is possibly a misclassification as it was learned that they were a manufacturer of wax candies. They could have also produced food/ice cream but no evidence of that has never been found.

Some beverages held a separate designation in the American Card Catalog. Others in this section include J-Cards (Soda) and K-Cards (Coffee) as well as any other types of beverage items not elsewhere classified.