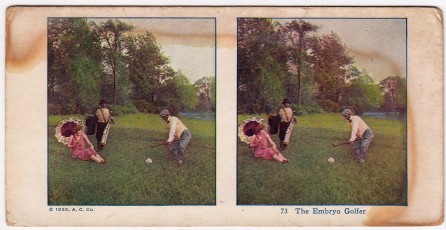 Q-Cards are designated in the American Card Catalog as stereoscopic cards.

These rare types of ‘card’ were primarily printed in the 1800s. Even pre-war ones in the early 1900s are considered to be among the later issues as they were getting less popular as time went on.

Stereoscopic cards (sometimes called stereoviews) typically have two images printed on them. When looked at using a viewer, they appear as one three-dimensional image.

Most of these cards are non-sports related and include pictures of people, buildings, or places. However, a few do include sports subjects (both generic/non-professionals and ones featuring real athletes). Prices on these unique cards vary but many are quite affordable.

Only stereoscopic sets including golfers are listed below.