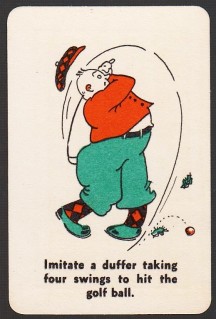 These were cards issued as part of various games. Often, gaming cards are good ways to find inexpensive releases of stars and Hall of Famers. Most gaming cards, however, feature generic players. Since those are usually cheaper than cards with actual players, gaming cards can be an inexpensive way to collect pre-war cards.

It should also be noted that many more pre-war sports games exist. However, this site focuses only on ones with cards as a part of them.

Despite their age, gaming cards can also be found in excellent condition. Part of that is due to the cards’ manufactured rounded corners, which help them exhibit less wear than cards with originally-sharp corners. Another factor is that some games were boxed away and used only sparingly. While somewhat rare, it isn’t impossible to find complete game sets up for auction where the cards appear virtually untouched.

Interest in gaming cards varies, depending on the issue. Those featuring pictures/names of actual players are generally more desirable than those that have pictures of generic players. Basic action cards (those with only words on them to allow for game play) are not usually as sought after as those with pictures on them. However, they can also be an inexpensive option for type collectors that simply want any card from a particular set for their collection.

Note that the WG-Card designation was initially given to types of greeting cards in the American Card Catalog. Similar to the N-Card designation which has changed over time, this is another one that is used differently by today’s collectors.