Whenever I get asked about affordable pre-war cards, I have a few standard ‘go to’ answers. I’ll be highlighting those in a series of articles over the next few weeks called, “Breaking into Pre-War Collecting.”

I gave away a few of these this week on Twitter (give the site a follow there so you’re not missing out).

Game cards are a great way to get your feet wet in the pre-war market. For one thing, they’re commonly in great shape. They were usually either a part of a board game or simply cards part of a deck that could be played without a playing surface. The reason why many are often in good condition is that they were likely not played too frequently. Think of something like cards in your board games such as Monopoly. Unless you’re an enthusiast, they’re probably in good condition.

The above average game card conditions are also aided by the fact that most have rounded corners that don’t show the dings and typical wear that cards with sharp corners do. Add those two factors together and finding these types of card in great shape, despite their age, is not hard to do.

With that out of the way, there are basically three different types of game cards. Let’s take a look at them. 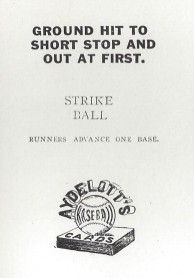 These are mostly the least desirable game cards, for the most part. Some older issues from the late 1800s or early 1900s are of interest, but in general, more recent ones are going to be your cheapest options if you’re simply looking for some pre-war sports cards to buy.

These usually will only include text on them and were used to depict a particular action to play a game. They might have only one word or a few words, but the key is that there are few graphics going on here and no real pictures. They may have graphics on the back but the face of the card is mostly only text.

Also in this category are cards that might simply have a piece of equipment on them. Some sets will include an action as well as something like a baseball, a bat, or a catcher’s mask. But they won’t have pictures of players, etc.

Because there aren’t really pictures on them, a lot of collectors might pass on them. But type collectors, pursuing one of a card in different sets, look for them as do collectors who simply want to add some older cards at cheap prices. There may be some hoping to assemble complete sets, too.

One example of these are the 1910 Aydelott’s Baseball cards shown here.

Pricing for these types of cards will vary depending on the set, year, condition, etc. But you can find a lot of printed action game cards for $10 or less.

These are cards that do have pictures on them, often colored. In general, they might feature pictures of generic players or different types of baseball/sports scenes.

These are definitely more desirable than the cards with only printed words and the good news is that they’re often not much more expensive.

Sometimes, too, these will feature players that might be designed to be a specific player. For various reasons (one being they may not have compensated the player to use his likeness or name), however, they may not actually name the player. The Ya-Lo Football Game set, for example, used a card that could represent Hall of Famer Red Grange. Grange was actually a part of the company but is not named as the player shown on the card.

Another example is the 1938 Whitman game set, which features players without numbers on their jerseys. One, however, features a runner stealing home with a No. 4 jersey that I believe could be Lou Gehrig. 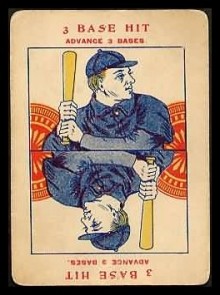 Even cards without potential player links can be attractive options and the good news is there are lots of them. The 1922 Olsen Game set features a great baseball scene pictured here and lots of other great images of generic players can be found in other sets.

Another great thing about these types of cards is that, while they don’t have specific pictures, they can provide a peek into the types of uniforms that were worn in an earlier time period.

The 1903 George Norris game cards or the 1910 Tim Jordan game cards (pictured here), for example, feature pictures of the top half of players that show off some of the earlier apparel of baseball days long gone. One of the Jordan cards is pictured here. I personally love the Tim Jordan set not only for its images but because of the fact that it was actually developed (at least in part) by former player Tim Jordan.

Of note is that other players also endorsed games and had a hand in their production. For example, Walter Mails helped develop the 1924 WG7 Walter Mails game set, named after himself.

Some game cards feature actual players on them, too. While most of those are more expensive, even ones with players can sometimes be found relatively cheap.

A good option (maybe the best one in terms of pre-war game issues with real players) in particular is the 1936 S&S game card set. Commons can usually be found in the $10-$15 range and even star cards and Hall of Famers aren’t too much. I once snagged an SGC graded 60/5 of Hall of Famer Charlie Gehringer for about $15. That’s the exception and not the rule but it’s not a stretch to find lesser Hall of Famers like Gehringer around that grade for under $35 or so.

Games cards are also a good issue to collect if you’re looking for cheaper, more affordable big name Hall of Famers. The 1913 WG5 National Game Joe Jackson card shown here is a popular one for collectors looking for one of his cards. It’s still several hundred dollars even in low-grade condition, but cheaper than most of his cards.

Other popular sets featuring real players were the 1906 WG2 and WG3 Fan Craze Sets. Those featured incredible black and white portraits of players and are really well done.

If sets like those are too expensive, cheaper options exist if you’re willing to get innovative. Sometimes, real pictures of players were used but were on the backs of cards. The 1913 Nap Lajoie game cards are examples of that. Lajoie was pictured on the back of every card. Because it’s really him, there’s always demand for it. But because he’s on every card, they’re also really cheap. You can usually find these for about $15.

In addition, other cheap sets in particular, have generic pictures but also include the names of players such as Babe Ruth and Ty Cobb.

The 1934 Quaker Oats Ask Me set (examples shown here) was part of a trivia game. These feature two-sided cards with a generic baseball scene on them and blue and orange borders. A few of the answers contain specific names of players, such as Babe Ruth and Lou Gehrig. Those are some of the more desirable cards in the set but will be cheaper than your standard Ruth/Gehrig cards.

Another similar type of issue was the 1924 Rook Game, which was sort of like Pictionary. It included non-sports subjects but also includes cards featuring Babe Ruth and Ty Cobb, where players of the game are to mimic their actions. Those have cartoon drawings that clearly don’t depict either player. Still, because their names are on the cards, they draw interest from collectors.

Prices on these types of sets are all over the map depending on the set and player desired. But they’re still usually cheaper than other cards of those same players.

If you’re looking to break into the pre-war cards, game cards are an affordable way to do that. There are a lot of them to explore and you can find writeups on them here.