This month was the first in a while that I sort of felt like my card buying has really picked back up again. I’d been saving my pennies a bit with the new house purchase and while I’m still paying two mortgages (anyone wanna buy a house?), I’m at least past the stressful part of closing, etc.

I didn’t have a ton of big purchases in May but did manage to pick up some really unique items and got my hands on a good bit.

The stuff that’s not rare? It’s more T206s. I continue the upgrade game on my set and picked up a dozen or so upgrades.

I hate to start with T206s since it’s one of the things I mention in the summary at the top of cards that I’ll be mostly avoiding. They are too common to be noted, really, compare to the other stuff I’m usually chasing. But that said, the upgrading has really become a focus of my collection so far this year and it’s too significant not to mention.

Here are four of them as an example.

My set had been looking better in general before I really dove into the upgrades this year. But it’s slowly getting better and better, even as a lower-grade set. My initial focus was removing the absolute beaters and while I’ve still got some of those, I’m also now diving into trying to remove as many of the cards with other significant defects, such as numerous heavy creases or paper loss.

The cards I’m upgrading to aren’t high-grade, to be sure. But I’m aiming for stuff that is more in the ‘good’ range as opposed to ‘poor.’

While my main focus on T206s has been upgrading, I also keep an eye out for the more oddball stuff out there. One thing I recently picked up was this scrap of George Moriarty.

Some scraps (cards with significant print or production defects with the majority assumed to be discarded or not given to consumers) are blatant. Others are questionable. This one is sort of in between.

Two major things point to this being an obvious scrap. First, the card is wider than a traditional T206 and is hand cut. Being hand cut alone is not great evidence for scraps for the simple reason that anyone can take a pair of scissors to a card and give it a hand-cut look. What you have to watch for are cards with larger dimensions that are hand-cut. The other obvious flaw here is that the card is missing red ink. That is clearly seen in the player’s skin tone and also the background, which is supposed to have an orange sunset but instead only is a pale yellow. 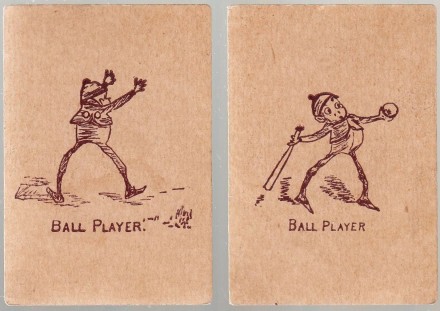 Alright, enough T206 talk. Let’s get to, frankly, some of the cooler stuff.

My favorite oddity that I grabbed in March was a set or near set of Palmer Cox Brownies old-style playing cards, presumably from the late 1800s or around 1900. This was large a non-sports offering with some sports cards included. These seem to be cards from a matching game because each subject or sport has two cards. Plus, matching sets of cards like these (like the early 1900s Lion Coffee cards, for example) have a similar look and feel with similar, very thin cardboard stock.

Frankly, I’d never seen or heard of this series. And in looking for it since, I could not find other examples. But the gem of the find was this pair of baseball players. That undoubtedly drove the price on it up and others clearly noticed them because it was not a particularly cheap lot.

Still, anytime something this rare comes along, I will often try to buy it for the simple fact that I never know when/if I’ll see it again. I wrote more about these cards here.

Sticking with baseball, I managed to pick up another great oddity.

This is an old glass plate negative for a baseball scene in Germany. Now, this isn’t one of those issues that came out of the country. Rather, it’s a negative of a picture of a German baseball game that was used by famous New York-based firm Underwood & Underwood. That company created all sorts of stereoscopic cards from the same era, as well as a slew of other cards (including the rookie card of boxing legend Jack Dempsey, for one). The negative is copyrighted by them and includes a rather unusual picture.

Shown is a baseball game in Germany that looks somewhat standard, until you notice the umpire in full medieval garb. I don’t even know if that was so much a stunt as it was a general approach to protect himself from a pitched ball. While that’s cool, the really notable part of this is that it is from the first baseball game known to happen in Berlin. I’ve found a few references to this game noting the umpire’s unusual uniform.

Another fantastic baseball pickup was this trio of cards from the 1929 Kashin Photos set. If you’ve been reading this blog for a while, you might remember a rather lengthy article I wrote about the Kashins and an apparent related issue. But despite some interest, I really hadn’t gotten too much into them. They are more photo than card and one of the numerous 1930s gum/candy issues that I don’t really bother with much.

However, these caught my eye based on the overprint advertisements on them or a company named Anthracite Baking. A very small number of Kashins have been found with advertisements (usually on the back) or stamps of company names. Like, a ridiculously small amount. These (Hall of Famer Heinie Manush, Lew Fonseca, and Oscar Melillo) advertised a baking business in Pennsylvania.

If you’re interested, I wrote more about these here.

This is a somewhat baseball-heavy writeup but I promise we’ll get to a few other things before we close it out. A final baseball issue I couldn’t go without mentioning was a rare series of stamps/transfers out of Germany. These have a somewhat similar look to the 1923 German Transfers but unlike that set, these do not name specific players (even if one resembles the image on a Ty Cobb caramel card). These also featured full-body action images while that one was a set of portraits and upper body images.

Along with this set, I also picked up a set for a separate multi-sport issue that compares to the baseball-only series.

The really great thing about these are that they are affixed to the original manufacturer backing/header which would have been how they were displayed. Further, these are books of complete sets of the stamps — not simply one set. I was not familiar with either set at all previous to this so picking up several sets all at once of each one was kind of a crazy find.

I also wrote more about these here.

My favorite non-baseball pickup in May was this early postcard of cycling great Major Taylor.

If you collect cycling stuff, you know that Taylor’s cards have gone bananas. He was one of cycling’s first ‘stars’ and that he was a black cyclist also has made his stuff even more desirable, simply because there are so few early black athletes featured on cards.

Taylor’s more common Ogden’s cigarette and Felix Potin chocolate cards have soared in value, selling or hundreds of dollars. Some have recently even topped $1,000. But Taylor is also featured some early postcards that are arguably even tougher to find.

I recently picked this one up from France recently and it is even postally unused. It features a really great image of Taylor and is in wonderful shape. It is actually part of a rare set or subset of other sports subjects, including many other cyclists. I wouldn’t mind adding a few other postcards of him as they surface in the future. 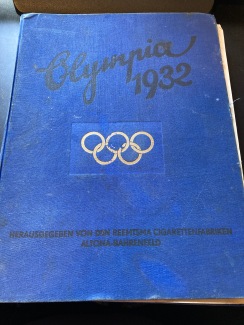 Speaking of international issues, I was thrilled to pick up a complete 1932 Reemtsma Olympia set recently. This one is bound in the book designed to house them, as many of them are. And while I’d probably prefer to have the individual cards, having the original collectible book is nice, too.

These pre-dated the 1936 Olympics where Jesse Owens starred, so it’s one of those foreign Olympics issues that don’t include him. But it does include several other keys, including assumed rookie cards of multi-sport legend Babe Didrikson-Zaharias and possibly the first card of Amelia Earhart. The Earhart card pictures her with several others, including surfing legend Duke Kahanamoku, who has a few other cards in the series.

There are usually a few of these on eBay any given time and, with the cards of Earhart, Didrikson-Zaharias, and Kahanamoku, they are often good buys. But I found this one particularly cheap and that made it even better.