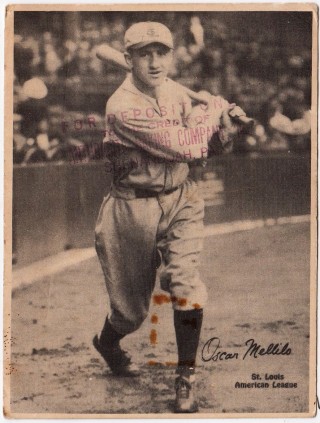 The 1929 Kashin photos were a rather unique set. Cataloged as R316, these were miniature photos of baseball players sold by the box. Sure, there were 101 in the set but the fact that collectors received 25 in a box made for a relatively easy set build at the time (with the exception of a few shortprints), assuming you could find them.

Almost all Kashins are blank-backed. That’s actually the way they were sold and intended. But a few were turned into de facto ‘trade cards,’ with businesses occasionally adding their name or advertisements to the reverse. As I wrote here in detailing these Kashins with a similar series, some of the advertisements found on the back advertised a movie theater — likely because they are believed to be the work of a man named Maurice Kashin, who worked in theaters.

Recently, though, I stumbled upon three of these with an advertisement for a baking company instead.

The company mentioned is the Anthracite Baking Company. Online, there’s little information about the company. However, the purple stamps bear their name as well as a Shenandoah, PA location. Shenandoah is a small town located in east central Pennsylvania, north of and in between Philadelphia and state capital Harrisburg. The few references to the company that I’ve found have been limited to advertisements in local Pennsylvania newspapers. But this was certainly an actual company with a location in Shenandoah.

Beyond that, we’ve got a little bit of puzzling text. Above the Anthracite name are the words, “For Deposit Only” and “To the Credit of,” which serves as a lead-in to the Anthracite Baking Company name. What these are or how they were used will likely remain a mystery. Were they to serve as a legitimate receipt of a deposit of some sort or were they merely the work of a random employee using a company stamp on cards for no real reason?

Given the use of these photos by other businesses, my guess is they did serve some sort of purpose. We know that other companies printed their advertisements on this issue so I’d lump this into that grouping. However, we’re left with a bit of intrigue here as the stamp’s mentioning some sort of deposit does not explain how these were used vs. other known advertisements that explicitly promoted events or even cited the photos could be used for admission into venues. As a point of reference, here are some Kashins with other known advertisements.

As shown here, these are Kashins for Lew Fonseca, Oscar Melillo, and Hall of Famer Heinie Manush. The backs are blank but they have been overprinted with the stamp for the Anthracite Baking Company.

I had previously never heard of any other instances of Kashin photos with this mark but a Net54 thread, as they so often do, shed a little light. In that thread is a reference to another Kashin with the mark — one for Fred Schulte. There, the name is referred to as Anthracite Bakery. However, as you can see on my stamps, the name is very clearly Anthracite Baking. That collector noted his overprinted Kashin was picked up in a flea market in Scranton, PA — which makes sense, given the stamped Shenandoah, PA marking for the Anthracite Baking Company is only about an hour south of there.

Are there other Anthracite Baking examples of Kashin cards out there? Almost certainly. But like the other marked Kashins, they are certainly a rare breed. Finding any Kashin photos with advertising on them is quite difficult and these are no exception.