Looking for Pre-War Boxing? Start with these Sets.

With the dramatic rise in the prices of baseball cards, many collectors have really taken a dive into expanding their reach. That’s certainly held true for me, anyway. One sport that’s kind of gotten more of a look is the sport of boxing.

I’d argue that boxing still remains a fringe sport — that’s especially true with the rise of MMA, which has competed with the sport for fans. I just think that many sports fans would have a difficult time identifying even, say, ten current fighters today. But for collectors of early cards, there’s very much a strong interest in boxing. Cards of the legendary Jack Johnson and Jack Dempsey, in particular, have really exploded. But there’s solid interest in others, too — even commons or cards of past champions that are less recognized.

I recently got a question on Twitter, which I thought was a good one — how can someone start collecting boxing cards? Here are seven somewhat common and popular sets that are relatively easy places to start. There are better, more rewarding sets for advanced collectors than these. But if you are looking for an affordable place to start, here are some ideas.

Want to learn more about a particular set? Click on the link in the description below to be taken to the page with set information and checklists. 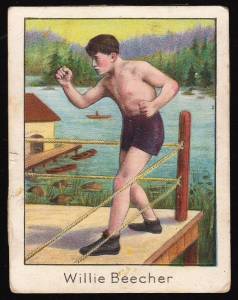 At the moment, this is probably my ‘Leader in the Clubhouse’ for early tobacco boxing card sets when it comes to a starting point. The set dates to around 1910 and is a great example of pre-war lithography.

The T220 Mecca Champion Athletes and Prizefighters set, by all accounts, was supposed to be larger. That title gives off a multi-sport vibe but the only cards in it are boxing cards.

At 2 1/2″ wide by 3 1/4″ tall, the cards are a bit larger if you’re looking for a card type that is closer to today’s modern standards. That’s not necessarily a drawing point for me but they fit nicely into the standard 9-pocket pages for binders or regular size toploaders if you like some uniformity with modern cards.

So what is there to like about this set? For one thing, it includes only 50 cards in all and is a relatively easy build. Many of the cards in decent low-grade shape can be bought with prices starting around $10 or so. And some of the pictures have extremely unique backgrounds, such as Willie Beecher’s card here with a boxing ring pictured outdoors at a lakeside (I wrote about the unique scenery of the cards here). Some cards will cost more, obviously, but all can be found for well under $100. John Sullivan, the most valuable one, starts around $50-$75 in low-grade condition.

The checklist is also not a daunting one. That can be disappointing since it doesn’t include some greats, like Jack Johnson. Still, it covers a long history of boxing, starting with the likes of early heavyweight champ John Sullivan while continuing through to the then present day. It’s a set that you can build in low-grade condition for under a grand.

These are really two sets that I’m lumping together merely for space constraints and because of their similarities.

Issued in 1910, the cards were produced by American Caramel. The two sets look alike with few exceptions. E75 cards have the fighters’ names in all capital letters while E76 cards capitalize only the first letter. E75 cards also have blue ink checklist backs while the E76 cards have that print in black.

Even the checklists between the two sets are similar with only a few differences in subjects. E75 is certainly a bit more star studded with Jack Johnson and Abe Attell — two fighters missing from E76. So in terms of set building, E76 is a bit easier. But both sets are relatively affordable aside from Johnson, whose card usually tops $100. Commons from either set can be found starting as little as $10-$15 in low-grade condition — a steal considering the rarity of caramel cards.

Because of that, this certainly gets my vote for the set most under the radar at the moment. Many collectors have no idea how few caramel cards there are compared to tobacco cards.

And considering there are only 20 cards in each set, neither is an absolute bear to complete. With some patience, both can be completed in low-grade condition starting around $400-$500.

At that price, why not both?

In the past, the 1938 Churchman Boxing Personalities set was one of my ‘go to’ recommendations for collectors in terms of affordability. As little as a year or two ago, you could buy a complete set starting around $30-$40.

That ship has long since sailed with collectors realizing its value. Today, the Jack Johnson card alone will usually cost more than that these days. But it is still a very affordable set, all things considered, that you can buy starting around $150 or so. Because it is an international set, you can even locate bargains on it from overseas sellers from time to time.

Commons in the set start at only $1-$3 usually, and because it is a 1930s UK set, it’s often found in very good condition. The set contains a total of 50 cards and covers fighters from the early 1900s through the then present time. The big names in it are Johnson, Jack Dempsey, and a young Joe Louis. 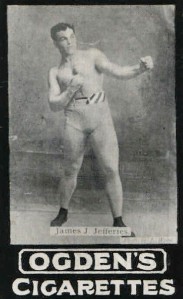 This one’s a bit tricky as the 1901 Ogden Heroes of the Ring cards are nearly identical in look to the cards found in Ogden’s other more common General Interest series for its Tabs Cigarette product. But this one is strictly focused on boxing and includes a total of 17 cards while that one has all sorts of subjects and about 1,500 cards.

While they look similar to the General Interest cards, they are easy to differentiate from the backs, which bear the Heroes of the Ring title.

The cards are like the other Ogden’s General Interest cards with excellent, real black and white photography and stark black borers. As a big collector of the General Interest cards, I’m a bit biased but I just love the way these card look and feel with a semi-gloss that makes them stand out a bit more and gives them a smooth finish.

This set is a bit more challenging than the others listed above. The cards are not found as easily and sellers often ask higher prices for them. But with some patience, you can find commons starting in the $10-$20 range.

John Sullivan’s card is the biggest prize here with that one usually topping $100. But the card also produced what is recognized as a James Jeffries rookie card, which usually starts around $30

The cards were produced for the Khedevial and Surbrug tobacco labels. If I had to recommend the easier of the two sets to pursue, it would likely be Set 101. Those cards have the silver borders (as shown on James Jeffries’ card here) and are significantly easier to find than the white-bordered Set 102 cards. Want a challenge? Shoot for 102. There are 25 cards in each set.

Set 102 is also made a bit more complex by a card of a fighter named Ty Cobb. This is not the same Cobb that played baseball — rather a fighter that took on his name likely for the sake of popularity (a common practice of old fighters looking for recognition). That card has gotten increasingly harder to find because of baseball card collectors seeking them as a novelty. You rarely see it offered for sale but asking prices can top $100 for it.

Set 101 provides a much more manageable path. Commons usually start in the $10-$15 range in low-grade condition and Jeffries is really the only headliner, though the set is full of plenty of good fighters. Even Jeffries’ card along with the card of notable fighter Joe Jeannette, is usually found starting under $50.

It should be noted that Set 102 commons are often not much more expensive because many sellers are unaware of their rarity. But the set is a much tougher build because those cards are harder to find. 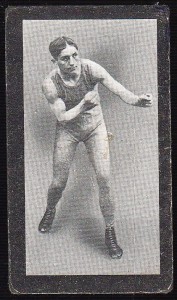 The 1912 Cohen Weenen set is one that would have been a great recommendation about two years ago. Unfortunately, like everything else, prices have for it have risen significantly. Still, it is one of my favorite boxing issues for its simplicity and was too appealing to leave off. The cards have simple, thick black borders with no text on the front.

The set is headlined by two cards of Jack Johnson. These days, you can expect to pay starting prices of about $150 for each in decent low-grade condition. But the good news is, besides that, it’s mostly smooth sailing.

At least from a price perspective.

Fact is, the cards are a bit tough to track down at times. They are from the UK so many American sellers are not even familiar with them. It took me over a year to locate a few of the cards.

The good news is there are only 25 cards in the set. Black fighters Sam Langford and Joe Jeannette bring some bigger names. The set also includes two rookie cards of Hall of Famer Georges Carpentier. But in lower-grade condition, those cards start under $50. Commons typically start around $10-$15. The bigger problem with this set, as stated, is that the cards are a bit tougher to find. 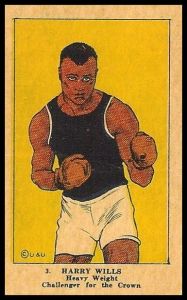 The final set I wanted to throw in here is the 1923 W515/W529 strip card set. It’s certainly not the most attractive, but it’s short, cheap, and mostly painless.

First things first — you’ll find this set classified a few different ways. Sometimes, you may see it listed as uncatalogued. Others you will see it called W529 — a later strip card designated for several sets. And others, you will see these cards W515. I tend to stick with that one because they were printed with the exact same layout and time as the W515 baseball strip cards. They have different numbering (1-10) from those cards (1-60) and are technically a different set.

With that out of the way, why did I pick this one? First, it’s a small set consisting of only ten cards. It includes the legendary Jack Dempsey but the rest of the checklist is not too star-studded.

It’s also incredibly affordable. Cards start at only about $10 each and it might even be possible to find a really poor cut complete set under $100. Dempsey’s card starts around $30-$40 in lower-grade condition but poorly cut examples can sometimes be found for a little less.

To the rarity, these cards can be surprisingly hard to find. I don’t know that I’d call them patently rare but there are not oodles of them all around, either.