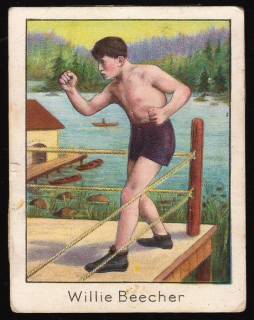 The T220 Champion Athletes and Prizefighters set is one of the more popular 20th century boxing tobacco card issues. The cards were distributed inside packages of Mecca and Tolstoi Cigarettes. Unlike most of the other tobacco cards of that same time period, these are larger and shaped more like a square. Among pre-war boxing tobacco sets, this is one of the more heavily collected ones.

The set appears to have been destined to be larger at some point and we know that from its name. While it is called the Champion Athletes and Prizefighters set, only boxers are known to be in it.

The T223 Dixie Queen set used the same images from the T220 set but the two sets have a few differences. First, they were printed on different paper. The T220 cards are also slightly larger than the T223 cards and, instead of Dixie Queen ads, these have Mecca and Tolstoi ads.

The styles for the cards varies as some feature individual boxers while others feature fights between a pair of boxers. Additionally, while some of the cards featuring two boxers include their full names, others only have their last names.

The set includes both active and retired boxers. John L. Sullivan, for example, is one of the key cards in the set, even though his career had ended many years before these cards were issued. Because it includes fighters of different eras, it is a star-filled set with plenty of big names.

The cards have color pictures with mostly thick white borders on the front and a description of the subject(s) on the back as well as a tobacco advertisement for either Mecca or Tolstoi. The scenery used for many of the photos is a bit unique and not necessarily indicative of backgrounds where more modern fights might take place. Some of the cards have a short biography of the fighter on the back while others simply provide his record.

Like many other pre-war issues, the card stock on these is relatively fragile. That makes finding higher-grade or even mid-grade cards a bit of a challenge.

In addition to the standard white bordered cards in this set, a separate set also exists.

The separate set is a smaller, 25-card release, that is also known/classified as T220. But it is, in fact, an issue different from this one and these cards have silver borders.

Of note is that two of the cards, those for fighters James Corbett and and Mike Donovan of Today, are in that silver bordered set but are extremely rare. Only a handful of cards, at most, are known for the two fighters and the card for Donovan, in particular, was only recently discovered this century.

The exact reason for the set variation is not entirely clear, though it is believed to have been issued before the larger, white border set. We can say that because of one of the cards in it for fighter Joe Coburn. Coburn’s cards are another topic entirely.

While prices fluctuate, obviously, a very rough evaluation of the cards is that the silver bordered ones for most subjects seem to sell for roughly about twice or three times as much as the white bordered ones. You can, of course, throw that out for the rare Corbett and Donovan issues. Those are worth much more. 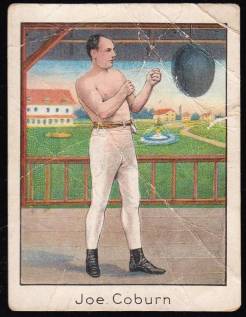 At least a couple of different Coburn cards exist. PSA states that a card with Coburn exists that includes a man in the background watching. While that card does definitively exist in the aforementioned silver border set, it is not known/confirmed in the standard white border cards. However, PSA has graded one according to their population report for the set.

Most of the white border cards simply have a darkened area where the man was standing on the silver bordered cards. However, a few have a more definitive light blue shadow of the man’s shape. This Net54 thread includes a scrap for the Coburn white bordered card with the more defined outline for the man in question. Thus, two known white bordered Coburn cards exist — the version with the man virtually gone and the one with a blue ‘man’ showing.

If there is in fact a white bordered Coburn card with the full image of the man showing, it is exceptionally rare. While PSA has apparently graded one, it is unclear if that example has an image of the full man or merely the less common blue shadow figure printed on some of the cards.

Mike Donovan – Then and Now

Another intriguing subject in the set is Mike Donovan and he appears on two cards.

Donovan is pictured on one card in the set as an old man at the age of 62 but is still in the ring as if he were preparing to fight. At the time, he was the boxing instructor for the New York Athletic Club and his card states that he remained just as active as he was in his youth. That card is titled, ‘Mike Donovan of Today.’

Donovan also has a different card picturing him as a younger fighter in the 1860s when he was the world champion. That card is titled, ‘World’s Champion in the Sixties.’

Below is the 50-card set. The 25 cards known to have silver border variations are in bold.

tagged with 1910 Champion Athletes and Prizefighters (T220), 1910 Dixie Queen Prizefighters of the Past and Present (T223), Boxing, Tobacco Cards