I’ll Fight You Here, There, or Anywhere

Despite its somewhat complex name, the T220 Mecca/Tolstoi Champion Athletes and Prize Fighters set included only boxers. This 50-card set featured boxers from the past and ones that were currently active.

It’s a relatively easy one to piece together as far as tobacco card sets go. None of the cards are particularly difficult and while there are some big names in it, the most expensive one is generally John Sullivan with his card generally around $50 or less in low-grade condition.

One of the more interesting aspects of the set is the varied scenery. And while that doesn’t seem so odd at first, once you see some of the pictures, it becomes immediately clear that old style boxing took place in all sorts of settings. You might be inclined to believe that some of the scenery in it is exaggerated. But in reading accounts of old fights, there are tales of boxing matches taking place just about anywhere and the pictures begin to make more sense. 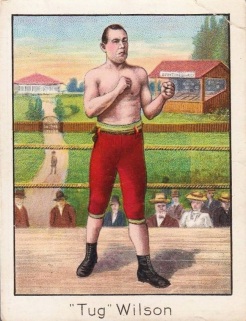 Many of the cards, for example, showed fights taking place outdoors. And those settings varied quite a bit.

This card shown here for Mike Donovan is a more formal one. Donovan is interesting because he actually has two cards in the set — one depicting him as a younger fighter and another showing him as an older one.

Here, Donovan is pictured in an outdoor scene with a ring and formal seating areas for spectators. The entire setting is one in a rural area with no buildings around, save for one off in the distance. A similar style picture, minus the seating areas, for Tug Wilson’s card, as shown here. And speaking of rural areas, that was a common theme with this set as numerous other similar cards were included in it. 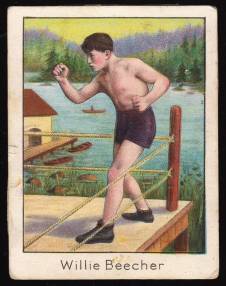 Other cards were even more drastic, showing off waterfront scenery. Two of those were cards for Willie Beecher and Pal Moore.

The set also includes some other interesting waterfront cards, too. Jack Burke, for example, is pictured fighting in a ring along the water with a fighter on the outside and men approaching in a canoe.

Others are odder still.

There’s a hodgepodge of other cards with varying backgrounds that look even more interesting. Here are a couple of those.

Jem Carney’s card has the fighter simply in a wooded area on a road. And if you really want unique, there’s the card of Ben Jordan.

Jordan is shown in a coliseum setting of sorts, posing in front of pillars. He’s shown here in an area above a separate seated area where spectators are actually taking in a different bout. If one had to speculate what was going on here, Jordan looks to be in a warm-up area of sorts preparing to fight.

And of course, there are good old-fashioned pictures featuring fighters inside of a boxing ring that is indoors.

Several cards meet this criteria. While less dramatic, the artwork on them is still generally pretty good.

These cards typically showed a fighter inside the ring or perhaps a workout room against a monochromatic background. Here are a couple, including boxers Joe Wagner against a red background and Tommy Burns against a green one.

When you boil it all down, the T220 set is a great boxing issue. It has plenty of big names, good artwork, and is pretty affordable. And part of the set’s intrigue lies in the unique backgrounds that were used.