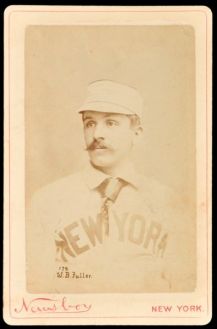 The 1895 Newsboy Cabinet cards featured baseball players among hundreds of other subjects. In all, there are more than 600 cabinets from set.

While the baseball players are the most valuable, other sports are found here, including boxing and wrestling. Some 19th Century tobacco card collectors, for example, will recognize William Muldoon in this set from the N28 Allen & Ginter issue.

Backs were blank and the fronts included the image of a player. Hall of Famer John Ward is included twice in the set of sepia-tone and black and white cabinet cards.

Card numbering in the set begins with No. 174 as it is in the middle of this incredibly large set. Each card is hand-numbered and the name is written in cursive lettering on each one. Pictures of all of the baseball players in the set can be seen here.

Below is a checklist of only the baseball players.