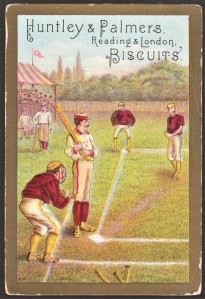 Man, it’s been crazy lately. The whole year has sort of been a collecting blur, to be honest. Frankly, I’m buying more than I ever have and even with prices that are continually rising, I haven’t been slowing down much. I’m just finding more and more stuff out there and picking and choosing has gotten increasingly difficult.

Then, of course, I attended the National. I didn’t include those pickups here but if you want to read about those, you can do so in this article. This stuff was all stuff that came in purely in the mail in July.

So let’s get into it.

These have really been on the rise lately. They’re getting harder to find much less than $150 these days, even in lesser condition. It’s part of a multi-sport set of trade cards issued by Huntley & Palmer’s Biscuits and these cards are distinguishable by thick gold borders. An early golf card is the other big prize in the set.

Sticking with baseball, the most unique card of possibly the year is this — whatever it is.

This incredible card was buried in a vintage lot that I bought. Classifying it is virtually impossible but the image is certainly taken from Red Murray’s picture, which was used in the E94 George Close Candy set and the E97 C.A. Briggs set.

Whatever it is, though, it certainly has a period look and feel to it. There’s the red ink for Murray’s picure on the front and the back references another pre-war player in Harry Gaspar with early stamping and fountain pen ink. The back also includes the name of Richard Montague handwritten and Montague’s name is found on other pre-war cards as a likely collector.

I wrote more about this weird find here in case you want to read more about it.

No, Breen didn’t become a big major league baseball player. But he was inducted into the Canadian Sports Hall of Fame and Canadian Football Hall of Fame.

The card is unique because Breen is one of only two baseball players found in the multi-sport set. And this one’s also attractive as it includes the coupon at the bottom. Many of these cards have the coupons removed, including an earlier version of Breen’s card that I picked up a while back.

Breen is pictured here wearing a jersey for Hillcrest, a Toronto neighborhood. According to the folks from the At the Plate website, a Canadian baseball page, Breen played for Hillcrest in 1923.

I was glad to finally secure one with the coupon still intact and the rest of the card is in tremendous shape. I’ve got this one earmarked for grading once/if prices come down a bit.

I wrote more about the two baseball cards found in this set here.

Little more baseball as I transition over into non-sports for a bit.

I was really happy to get my hands on a complete set of the 1930s Just Kids Lowney’s Chocolate set.

This 24-card set is mostly a non-sports issue. It’s also similar to the 19h century N88 Duke Terrors of America set in that it pictures mischievous kids mostly getting into trouble.

Most of the cards in the set are not sports related. But the two keys are a pair of cards depicting the kids engaged in baseball. One shows children picking sides for a baseball game and the other shows two teams o players trying to win the favor of an umpire.

These cards were issued in Canada and are pretty tough to find — particular the baseball cards, which are often hidden away in collections. Coupons were originally attached to these cards and unfortunately those were removed here. However, like the Dominion Chocolates cards I mentioned above, that’s quite common with these.

Quick dive into non-sports then we’ll get out of here, I promise.

I was thrilled to pick up this trade card of P.T. Barnum, aka The Circus Guy.

I’ve been on the lookout for more of Barnum’s stuff lately and, sadly, there isn’t much of it, which is kind of surprising given how popular he was with his traveling circus.

There is, for the record, quite a bit of trade cards and memorabilia regarding the actual circus show and acts. There are even many cabinet cards of performers. But there are few actual trading cards depicting Barnum himself aside from cabinet cards.

This one here was titled, “Every Man Rides His Own Hobby.” It depicts Barnum on an elephant with the “Greatest Show on Earth” moniker, which his circus became known as. Barnum is identified by the name on his top hat.

This particular card was for a store run by A.M. King but like other trade cards, it was distributed with other business names/advertisements on the bottom.

Back into the world of sports, let’s head back to baseball briefly. One of the pickups I was most excited about last month was this trio of blank-backed candy cards.

I wrote about the find here. Unfortunately, because these images were used in several different candy card sets, they cannot be definitively traced to a particular set. However, all three of these pictures were found in a couple of different sets together — the 1909 E92 sets (Nadja, Croft Cocoa, Croft Candy, and Dockman) and the E101 set. With all of them found together at once, my strong hunch would be that they came from either of those two sets.

While blank-backed tobacco cards are seen a decent amount, finding them in the candy/caramel card sets is far less common. A big reason for that, surely, is because most early candy/caramel (E-cards) sets are much rarer than many tobacco issues. So when you find black backs on cards like these, it’s just not something you see every day.

Couple more, then we’ll call it a day. First, there’s these four Stollwerck Chocolate cards that came in. These picture golf and tennis subjects and are among the more valuable of the sports cards in the entire series. An ice hockey is another card heavily pursued but the golf and tennis cards are right there.

These four came out of Series No. 566 in the massive Stollwerck series. In short, there are thousands of Stollwerck cards and they are mostly broken into six-card subsets covering all sorts of topics. There are several subsets relating to sports and No. 566 is probably the most significant one.

Finally, from a checklisting standpoint, I was able to add a fourth known card to a rare set of Victorian football trade cards.

I found this card and had never seen it before, knowing of only three cards in this set of striped uniform football subjects. I had to have it as soon as I saw it and now have all four known cards.

The checklist of three was not confined only to this site, I should add. Interestingly enough, I found a dealer at the National that had the three cards I knew of. I looked at his set and showed him the fourth card on my phone. The card was entirely new to him as well as he had believed his set to be complete.

Whether or not any are added to the future is unclear. But for now, we’ve got a more complete checklist of this set thanks to the find of this card last month.