One Stollwerck’s Chocolate Sports Set Stands Out Among the Rest

If you’re looking for sports cards in the massive Stollwerck set, subset #566 is the one to find

Earlier this year, I wrote about the numerous Stollwerck Chocolate cards out there. Stollwerck cards were produced by a candy company out of Germany over several decades, starting in the late 1800s. The series is made up of hundreds of six-card subsets and while most are non-sports subjects, there are some sports series’.

Many of the sports cards are from less popular sports. There are, for example, subsets on track and field, gymnastics, and more. But there’s one sports set among the Stollwerck cards that draws the most attention — Subset No. 566.

Technically, the Stollwerck subsets are called ‘Gruppes’. And Gruppe No. 566 seems to be the most popular one when it comes to sports.

The set doesn’t offer any of the four major American sports. But it does offer golf and tennis, which are among the next best thing.

The golf cards are decidedly gender-oriented. One features a male player with a male caddie while the other, a female player and female caddie. 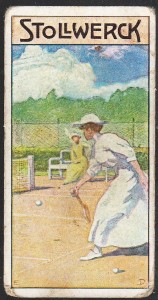 The most valuable of the cards are the two golf issues, for a few reasons. First, golf cards carry a bit more interest internationally than tennis cards do. Second, these maybe the only two golf cards in the set whereas tennis appears on other cards. There’s even a full subset dedicated entirely to tennis. The golf cards can range quite a bit in value because they are so rare. But typically, they start in the $30-$50 range each.

That’s not to say the tennis cards aren’t desirable, though. In reality, they are among the more popular sports cards.

Interestingly enough, one card features a singles match while the other, a doubles match. While one features a male player, that isn’t the singles card. Instead, he is paired with a female in a mixed doubles match. The singles tennis card belongs to a female.

The tennis cards also fluctuate greatly in price but usually start around $10-$20 each, when you can find them.

The final two cards are the least desirable. But they complete the set.

Both cards are equestrian related, though one is a little more sought after than the other. One card features a horseback rider while the other depicts several men engaged in a match of polo. The polo card is the more desirable one, though neither typically fetches large prices.

Each of these cards usually sells in the $5-$10 range, though, it should be noted that sellers understanding their rarity can ask a little more.

Many of the subsets in the Stollwerck series won’t draw the interest of sports card collectors. But for those that find an interest in Stollwerck, Gruppe No. 566 offers some great cards.