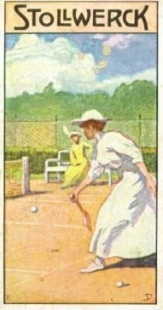 Stollwerck Gold Chocolate was a chocolate brand in Germany. The company produced a set of non-sports and sports cards, likely starting in the late 1800s. Numerous cards and designs were used over a series of different subsets.

Among their cards were several sports issues, including ice hockey, tennis, golf, and others. The hockey cards are generally the most desirable but others can have some value as well – particularly golf where there are a significant number of international collectors.

The cards are almost always colorful and generally have back advertisements written in another language – usually (if not always) German. A variety of designs were used, although most include the Stollwerck name somewhere on the front.

While the subsets varied, most appear to include six cards in each one.

With potentially hundreds of cards and not any great recognized source for cataloging them that I have seen, it is difficult to identify the known sports issues.