Pre-War Pickings from the National

Here are some of my more interesting finds at the National

As I wrote here, I had the chance to head to the National Sports Collectors Convention last weekend. I had a blast and while it was great seeing a lot of folks, obviously I was there to pick up some cards.

Like my regular In the Mail segments, I’m not going to cover everything I got here. A lot of stuff is from relatively common sets and we don’t need much diving into those. But I did get some unique cards along the way that I thought was worth a quick share.

The first card, obviously, was the T207 Louis Lowdermilk card. If you’ve read any of my posts from the last few days, you’ve already seen this mentioned. I covered it in a recap of my T205, T206, and T207 set journey and also mentioned it briefly in my overall recap.

This was the first card I picked up at the event on Thursday and easily the most important. I’d not seen one on the open market for probably over a year and even if one was out there for sale, it completely eluded me. So I was more than happy to find it there and, realistically, that was the one card I was looking for in Chicago.

Lowdermilk is a very tough card to track down. As I’ve written before, I’m not sure it’s necessarily the hardest card after the Irving Lewis No Emblem card, but it is one of a few that seems to be right behind that one.

That was the biggest pickup without question but the most unique one was an obscure sports set from around 1900 called The Game of Sports.

I wrote about this set (particularly the two baseball cards in it, which were my Obscure Cards of the Month) earlier, but this is essentially a 12-card matching set that was used to play a game.

The set includes six pairs of sports cards from baseball, tennis, golf, cricket, wrestling, and soccer. The cards were made in Germany, which helps explain their rarity over here. I dug and dug online for information on these rare cards and found only one other set of them.

You can see pictures of the two baseball cards in the Obscure Cards of the Month post but here are some others from the various sports.

One of the things I love about this set in particular was that it was in great shape. The cards were not necessarily cheap but at the end of the day, I really wanted them and couldn’t pass up the chance to grab them. After all, who knows when or even if I would see them again.

A third pickup was a ‘card’ from a set I’d never pursued before — the L40 College Yell set.

I use the term ‘card’ here pretty loosely as these are card-sized but actually leathers. This particular set featured colleges and universities.

Many of the leathers have pictures of equipment or mascots printed on them, but the most desirable ones are generally the four that picture athletes from major sports (even if those athletes are not necessarily modeled after real players) including this one featuring a University of Chicago baseball player and a Chicago track and field athlete. The other keys to the set include Amherst (with baseball catcher), and Bucknell and Rutgers, which both included football players.

The leathers are not impossible to find but they are difficult to locate. Part of that is because they are often misidentified with sellers not always knowing what they are. This was one that you’d file in the ‘not a bargain’ category but it was pretty rare, in good shape, and something that was a solid buy at the show. 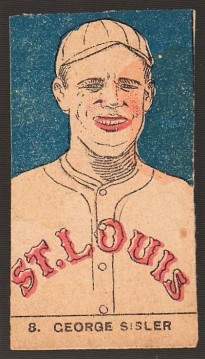 One of the great finds I had was a slew of strip cards from a dealer that was sort of tucked away from the main action. I was fortunate to come across him and only did because of a collector friend that mentioned his table to me.

The dealer had a ton of affordable strip cards, which were right up my alley and helped me fill some holes in W514 and W560 sets that I’m pursuing.

Among the cards I spotted, though, was a much rarer strip card featuring Hall of Famer George Sisler. The card not only appealed to because it was from the rare W9316 set, a much tougher issue that others, but also because the card had a major color shift, causing Sisler’s face to appear almost like a ghost when it should have a peach color. If you look closely, you can see that peach part for his skin forced over to the right and mostly off his face instead.

Color shifts are common in this low-grade set but this is even extreme for that release. I don’t think I’ve come across a Sisler this extreme and Sisler’s card is the most valuable one in the set, along with probably White Sox catcher Ray Schalk.

To make things better, this card was only $5 while his card in the set usually sells closer to $100-$150 — even in the trimmed down state here. It was just a fantastic buy and easily the biggest bargain of the show for me.

Another card worth looking at was this silk of Gertrude Vanderbilt.

Vanderbilt was in this set of actresses and baseball players, the S74 silks set. However, technically she was a famous sculptor and socialite in the famous Vanderbilt family.

Many collectors know of the baseball players in this set but the overall set included actresses and non-sports figures, too.

Some of the silks, like this one, are interesting in that they are attached to a cardboard tobacco advertisement. This one has an ad for the popular Turkey Reds. It wasn’t an expensive card but I was drawn to it because of the ad and that you don’t see these too often.

A final card I wanted to call out was a T218 Champions card.

I’ve already completed this set and am about 3/4 done with a second. But I love these cards and will almost always pick them up when I’m looking for stuff to buy and when they are inexpensive enough. I’m also particularly looking for them when trying to upgrade cards in those sets.

Sure, that’s not an uncommon set. And even cards of the fringe athletes, such as the bowlers, aren’t all that tough to find. But this one jumped out as noteworthy only once I got it home when I turned it over and looked at the back.

This is a card of bowler William Heins. But while the front is aligned properly, the back has a significant miscut, showing part of the card of famous billiards star Willie Hoppe.

There are obviously worse miscuts than this but it was a nice little find that I didn’t notice until getting home.

tagged with Articles, In the Mail, National Card Show