The 1916 Tango Eggs set is an interesting one to be sure.

The cards were not even really known to most collectors until a large find of them was discovered in the early 1990s. In short, hundreds of the cards were found in nearly perfect condition, meaning they likely had never been distributed. They make up most of the known population of the set but a few lower-grade issues have been found as well. That either leads us to believe that most Tango Eggs cards were not distributed or that many more were distributed but simply did not survive.

Whatever the case, four cards in the Tango Eggs set provide a mystery of sorts. 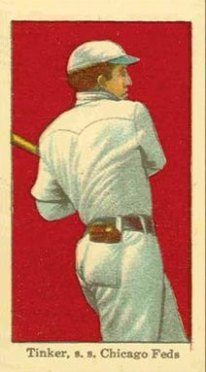 Four players appear in the Tango Eggs set that do not appear in the E106 set. Those would be Buck Weaver, Billy Meyer, Ray Morgan, and Hap Felsch.

Of the group, Weaver and Felsch are clearly the most desirable in terms of name recognition. Both were members of the 1919 Black Sox team and are highly sought by collectors. But Weaver’s card is actually one of the more common ones while Felsch is much harder to find. In fact, PSA has graded only one Felsch at the time of this article. Ditto for Morgan, who has only one PSA card as well. When you factor all of that, Felsch and Morgan are the best cards out of the group.

While they were new players not included in E106, though, the pictures were familiar. That’s because each of the four players utilized photos found in the E106 set.

Weaver’s card uses a picture for a card that was used in E106 for Joe Tinker. Meyer’s uses that of Fred Jacklitsch. Ray Morgan’s uses that of Mike Doolan and Hap Felsch’s uses that of Ray Demmitt. Because of that, it is often cited that their cards feature the ‘wrong’ pictures but that’s probably not really accurate.

Here’s why I say that. 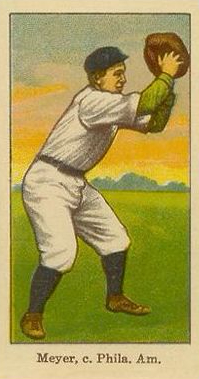 To understand the photo ‘errors’, you’ve got to first start in the past. In other words, the key doesn’t necessarily lie with the new players as much as it does with the old ones.

Using E106 as our benchmark, the players included in that set who were removed but had their images used in the Tango Eggs set were Joe Tinker, Fred Jacklitsch, Mike Doolan, and Ray Demmitt. And if you pay attention, there’s one interesting fact about all four. I tried to find the common thread between the group and then it hit me.

They were no longer playing with their same team in 1916 when the Tango Eggs set was released.

After 1915, Tinker went from the Chicago Whales in the Federal League back to the Cubs in the National League, where he’d spent the majority of his career. Jacklitsch played in 1915 for Baltimore in the Federal League and didn’t play in 1916. Mike Doolan? Like Tinker, he jumped from the Whales to the Cubs. Finally, Demmitt went from the White Sox in 1915 to Columbus in the American Association in 1916.

I don’t think that it’s any coincidence that those players’ images were used and that they were selected because they were no longer on their new teams.

My personal belief is that the former players were ditched for a reason. Now, what that reason is isn’t known. But two things come to mind.

First, their careers at that point could have been uncertain. The Federal League folded at the end of the 1915 season and the futures of Tinker and Doolan could have been up in the air at the time this set was being produced. Ditto for Jacklitsch and Demmitt who did not even end up in the majors in 1916.

There are players in the set, such as Roger Bresnahan, that were not with their original teams, either (Bresnahan retired after 1915). But perhaps they were not expected to leave the sport. The other four that were ‘booted’ could well have been gone because it was known they would not be back with those teams in 1916, forcing them to find some new players.

A second thought is that, perhaps Tango Eggs simply wanted the set to be a little different from E106 intentionally. Even if the players’ new destinations were known, it wouldn’t be out of the realm of possibility to want to add some fresh players.

Whatever the reason, and even if it isn’t necessarily one of those, I do think there’s some correlation between the fact that they were all leaving their former teams and were subsequently removed from the set. That, to me, seems far more plausible than the set’s producer using incorrect images and haphazardly misnaming players.

Fine, so why not just change the pictures if you want new players? Well, as I’ve discussed in other articles, such as this one on the E98 Irv Young/Cy Young fiasco, photos weren’t exactly easy to reproduce. While changing the name on a card could be done relatively easily, commissioning an artist to do an entirely new card was significantly harder. You had to find a capable artist and then pay an extra fee for him/her to do the work. It’s very possible that they merely kept the artwork out of convenience much as other sets that reused photos certainly did. Plus, if the set was hastily produced, there may not have even logistically been enough time for new photos, even if that’s what was desired.

Another reason that I think the pictures were intentionally used is that they’re mostly generic, run of the mill photos that could be used for anyone.

Two of them, Demmitt and Tinker, are shots that feature the players’ backs. The other two, Jacklitsch and Doolan, are both side angle shots that don’t give a good look at the uniform. A coincidence? Probably not.

Some of the other pictures from E106 simply couldn’t be used. Jack Barry’s, for example, has a front shot of him running with a large Philadelphia Athletics logo on his chest. Same for one of Chief Bender’s pictures. And Donie Bush, who has a Detroit Tigers logo on his hat. A real error card would have probably mixed one of those in. I’m convinced that these four pictures were taken for the new players because they were so generic in nature, not featuring any logos or any redeeming qualities that would positively identify them as someone else.

So when it comes to that, I don’t think these are ‘error’ cards at all, as they are commonly called. I believe the players were intentionally replaced and that these pictures were used on purpose, despite the fact that they were used for different players in another set.

Same picture for a new player? What kind of mess is that? Well, silly as it sounds, it wasn’t too uncommon. That trick has been pulled several times in other sets. To a greater extreme, look, for example, at the E91 American Caramel set or the N284 Buchner Gold Coin set. Those sets used the same poses over for various players. Again, likely as a matter of convenience and/or a way to save money.

The idea that Tinker was replaced because he changed teams, however, isn’t a slam dunk, exactly.

While Tinker is not confirmed to be in the Tango Eggs set, many checklists include he and Honus Wagner as having cards in the issue. No Tinker/Wagner images are known to the hobby and REA even offered $100,000 for proof of their existence in an auction. But they are widely checklisted despite the questions.

Tinker, though, did have two cards in the E106 issue so a second card could have been used for Tinker in the Tango Eggs set, assuming those checklists were identical. The idea, then, that Tinker was removed because of his changing teams doesn’t fit. If Tinker was included in the Tango Eggs set, a better theory may be that it was determined he didn’t need two cards and changing one to Felsch would allow them to include more players.

We may never know the complete reason why the photos were changed. But I believe that the player images that were used were not a mistake and that the ones chosen were done so with the intent of finding generic images that could be used for other players without looking out of place.