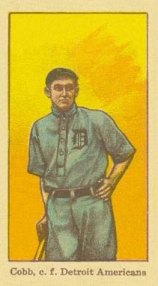 Backs of the cards do not include a checklist like some other caramel issues. Instead, the backs read:

“This card is one of a set of forty-eight leading Baseball Players in the National, American and Federal Leagues. One card is given with every piece of Baseball Caramel manufactured by the American Caramel Co. York, PA under the famous brand of the P.C.W.”

Some players were featured on more than one card in different poses. The cards are relatively scarce. To date, PSA has graded only about 300.

The most interesting aspect of this set was its dating. Printed in 1915, it was smack dab in the middle of World War I. Some cards are pre-war, others are post-war, but this one was mid-war (just so I’m not confusing anyone here, that’s tongue in cheek).

World War I ran from 1914 through 1918 and there weren’t many baseball cards produced during that time. That, of course, is completely understandable. And even though these cards were produced, it was likely not in large quantities. We know that by the population reports which show not many have been graded in comparison to more popular American Caramel issues like the pre-World War I E90-1 or the post-World War E120 and E121 sets.

The set used images found in other sets but its biggest connection could be to the 1916 Tango Eggs set.

The Tango Eggs issue is a rare set only recently made known to most collectors after a big find was discovered in the 1990s. That set was printed a year after this one and while only about 20 cards are known, many feel that it is a 48-card set as this one. That is partially because the cards found utilize the exact same images.