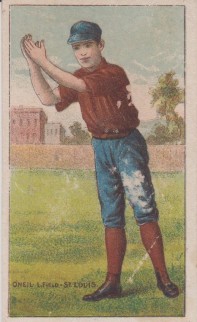 When collectors think of the earliest major baseball card sets, the first set that often comes to mind is the N172 Old Judge set. But also printed around the same time was the 1887 Buchner Gold Coin set, catalogued in the American Card Catalog as N284.

While the name might indicate otherwise, these aren’t coins. Rather, they’re baseball cards produced by the Buchner Company for their Gold Coin Tobacco product. The cards are dated to 1887 because of an 1887 copyright date that appears on the backs of most. However, some have no date at all, leading to the idea that some could have been produced beyond that year.

Despite being such an early card, the set isn’t among the most popular pre-war card issues for a few reasons. First, they’re rare and hard to find. And with a somewhat sizable checklist of nearly 150 baseball cards, that makes putting a set together virtually impossible.

The Old Judge and cabinet cards used actual photographs and other cards, such as the artistic T205 and T206 sets, featured outstanding lithography. These, by contrast, had pretty weak photos lacking a ton of detail. In all, three different lithographers were used in this set — Donaldson Brothers, Julius Bien & Co., and Liberty Printing.

Also notable is that many players have more than one card in the set. Different poses were used for players with more than one card. Hall of Famer Dan Brouthers, for example, has one card featuring him ready to catch a baseball and another with him holding a bat.

143 cards have been most commonly cited in this set but others could exist. What appears to be a poster cut out of pitcher Steve Toole, according to this Net54 post, was found in 2019. That could mean a card of his (as well as other poster cut outs for players not known in the set) exists as well.

In addition, while the cards are of specific players, some of the poses were used on several different cards for different players. But while this is sometimes called a ‘generic’ set for that reason, that isn’t really the case.

Many of the images are unique to a given player and were not reused. Plus, even the cards with the same poses have several differences from one card to the next. Unlike the E91 American Caramel set, a truly generic issue, the Buchner Gold Coin release had a lot more variety.

Here’s a deeper look as to why the set isn’t a generic one. 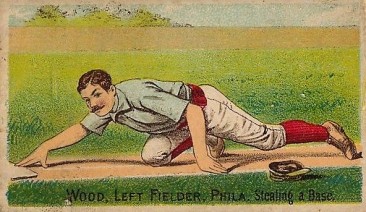 Two really unique cards are found in the set.

One for George Wood is a horizontal card, which is not used by anyone else in the set. In it, he is stealing a base and for some reason, that pose was not duplicated. Alphabetically, it is considered the last card in the set. If the cards were created in alphabetical order, it is possible that the artist wanted to do something unique for the last card.

Here’s more on the Wood card.

The other is the card of St. Louis Browns president Chris von der Ahe. Von der Ahe was included in the set for whatever reason and his card features a portrait of him. This pose was also not used for anyone else in the set and is probably the most unique card in the entire issue.

Another unique twist in these cards is that they can sometimes be found with parts of thick black letters and words on them. That is because they were printed as part of a large advertisement for the company’s product.

The printing is on top of the fronts, indicating it was added to regular sheets of the cards. The cards also have regular backs and were printed on a thicker stock as the regular cards. This was a different approach compared to other tobacco cards that were used in the advertisements. Typically, the backs were blank as the printers didn’t bother printing the backs onto them.

This tells me that the advertisements were likely very limited. If they had been mass produced, they would have probably printed them on thinner, less expensive stock and not bothered to waste additional ink needed to print them on the backs.

In addition to these overprinted cards, a second type of advertising poster card is known as well. Those, like more traditional poster cuts, are found with blank backs.

We can conclusively state that there is more than one type of these posters as covered in greater detail here.

While the Buchner Gold Coin set is widely viewed as a baseball issue, there are actually other cards that are a part of it.

In addition to the baseball players, a few other subjects are found with the N284 American Card Catalog designation. Those include jockeys, police officers, and actors/actresses.

Further muddying the waters is that a fourth lithographer, Ballin & Liebler, was also used for at least some of the policemen cards (and possibly others). Some of those have an 1888 date.

In all, this Net54 post references a total of five different backs that are found in the full Buchner Gold Coin set:

While all of these back types are thrown together under the N284 header, there are really three approaches that can be taken in determining what is a set.