Posted on December 27, 2016 by Pre-War Cards Leave a comment

The T51 Murad College Series cards were a set of cards featuring various colleges and sports. They are believed to be issued between 1909 and 1911. In the set are several baseball, basketball, football, and hockey cards among the 150 cards produced. Below is a checklist for the entire set with baseball, basketball, football, and hockey cards identified.

While they are generally referred to as ‘Murad’ cards, they are also sometimes referred to as the name of the producer as well – the S. Anargyros Company. That name is printed on the bottoms of the cards.

In all, there are eight baseball cards, six football cards, four basketball cards, and one hockey card in the set. While pre-war baseball cards are plentiful, the football, basketball, and hockey are some of the few pre-war cards in those sports that you’ll find. As you would expect, those generally draw the most interest.

The cards have a unique appeal and are often desired by non-collectors because they feature specific colleges and universities. They are particularly interesting because many of the cards depict athletes from obscure schools. Graduates of these schools are sometime interested in the cards, even if they aren’t necessarily trading card collectors.

While the big four sports are the most popular ones in the set, the release includes all sorts of other sports and activities. Golf, tennis, lacrosse, rowing, track and field, and others are all included. The set also includes some non-sports subjects. Some merely feature graduates while others feature outdoor activities, such as camping, hunting, and fishing. Some merely have a school pennant and a seal.

The cards were produced in six series of 25 cards each. Each card includes a color image and a college pennant and seal. These cards have a pretty broad appeal since they are popular with not only collectors, but also alumni of the various schools.

And as a brief aside, here are what I believe to be the top ten cards in the set. 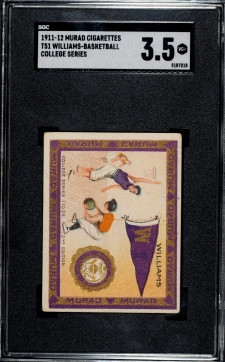 The four basketball cards (Xavier, Northwestern, Williams, and Luther) are particularly noteworthy. Many collectors view these as the first actual basketball issues ever produced. A few other issues possibly predate these but these are believed by most to be the first cards of actual college or professional U.S. teams.

Here is more discussion on the earliest basketball cards, including the T51s.

The Murad Williams basketball has grown in values over the years and it has shown a spike recently. Even in modest condition, the card generally sells for more than $100 these days.

While there are 150 cards in all in the standard set, a master set with 225 total cards is possible.

in addition to the six series, there was also a second edition (printing) of the first two series, giving us an extra 50 cards. Those cards were marked with ‘2nd edition’ on them so cards missing that label are 1st edition cards.

That brings us to a total of 200 cards so far. Beyond the second edition, there are also 25 cards with number variations. Those are all cards found only in the first series and they have a small number printed onto the fronts. Add it all up and there are a grand total of 225 different cards.

It is also worth noting that many print flaws exist in the set with regards to coloring in the printing process. Some cards are missing the gold in the border areas and others have slight color variations as well. While these exist and could be considered by some to be additional variants that should be added to the checklist, I have left them out on mine since they are really due to errors in the printing process as opposed to actual print variations where text was added to cards.

The cards are printed on somewhat thin cardstock and are easily susceptible to damage. It isn’t uncommon to find these cards with creases or even chunks of them missing. But that’s hardly the only thing that can plague them.

Because the cards have a gold foil border, they can sometimes be found with part of that wearing away. The most unique thing when it comes to condition is likely the packer stamps that are often found on the backs. These were likely quality control stamps of a sort that identified the packer (with a number – i.e. Packer No. 201) that put them into the cigarette packs.

While technically a mark on the card, these stamps are treated differently by collectors. Many do not take them account when considering the damage on the card while others do. The grading even seems to be a little inconsistent on them as well. I have seen high-grade cards with the packer stamps on them and, technically that really shouldn’t be the case since all cards are not found with the stamps.

PSA’s MK designation seems appropriate here but most of the PSA-graded examples I have seen do not have it.

These include the additional 75 cards mentioned above. The first 50 are 2nd edition cards and the last 25 are cards that had card numbers printed on the fronts.