Anyone that knows me knows that I have been touting the T51 Murad Williams basketball card for some time. Now, full disclosure here since I do own the card myself. But my interest in promoting it has been more about trying to understand why it’s remained such a bargain for so long.

As a point of clarification, there are three other Murad basketball cards in the set (Northwestern, Xavier, and Luther). However, the Williams card is the only one found in the first grouping of 25 cards (there are six groupings in all) and, thus, considered to be the earliest one of the four. And if you want to get technical, the Williams cards from the first printing edition are truly the first examples as opposed to some from a second edition. But, in general, the thing to know is that the Williams card has more value than the others.

Despite that kind of prestige, the card has been bought and sold for relatively modest sums through the years. In the context of the T51 Murad set, it, along with the Michigan football card, has usually been the most valuable card in the set. But it still had previously sold for relatively low amounts, given its rarity and, frankly, its importance.

I’d bought low-grade examples of it for as little as $10 in recent years. Even decent copies could easily be found starting around $25 less than a year ago. That seems to be changing, though. 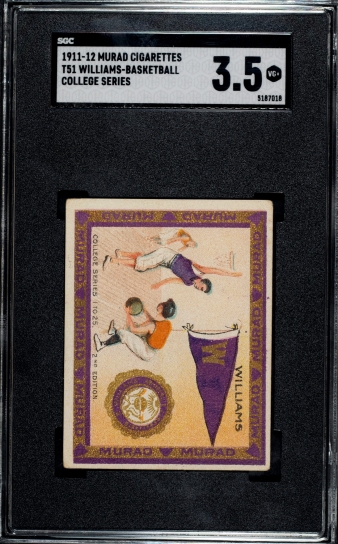 Those decent copies have suddenly shot up in price. I don’t know what’s caused it but the card has gotten a lot more valuable in a relatively short amount of time as it is now regularly topping $100 for raw versions that would probably grade about a 2 or a 3. Better ones are up around $150-$200 — or theoretically, more, depending on the grade.

The real kicker came recently when a rare variation of the card sold for significantly bigger money. The first 25 cards of the Murad set (the first series) all have rarer versions with a card number printed on the front. These versions are not always advertised/spotted because not everyone knows about them. And one for the Williams basketball card recently sold on eBay.

What’s caused the spike in demand for this card? I can’t say. You usually can’t with these things.

In the case of a card, like the Shoeless Joe Jackson T202 Hassan Triple Folder where it was recently discovered he was likely the baserunner (when the player’s identity previously was not known), it’s easy to see why. But for the majority of cards, these things just have a way of being discovered and can catch on like wildfire. Whatever the reason, the cards are selling for noticeably more than they were even as little as a few months ago.

A big variable in the card’s staying power is trying to determine just how rare the cards are. PSA, SGC, and Beckett have not even graded 40 of them combined. However, the majority of Murad cards are not graded. In fact, if you look at the recent sales on eBay, not a single one was graded. Further, there have not typically been many offered on eBay. But if more listings begin showing up, that could slow its price a bit.

Part of the reason for the few eBay listings is because the cards have not historically been worth a ton of money. Currently, there’s only one for sale there with an asking price of nearly $500. The other reason the cards have not been graded much is that they were printed on relatively fragile card stock that is easily damaged — there just aren’t a lot of high-grade examples of these cards to be found and there’s less interest, obviously, in grading low-grade stuff.

But given what we know about Murad cards, I do not think they are overly plentiful. The card has always had some value and, like the Michigan football card, there have never been a ton of them on the market at any given time. While I could see a few more listings popping up for the Williams basketball card, you’re not going to see dozens of them at a time.