The Ogden Tab Cigarettes General Interest issue was a massive set, believed to contain 1,560 cards spread out over six series (A, B, C, D, E, and F). Dating for the set is from 1901 through 1902 but reports conflict on which series’ were produced in which years. While severely underrated, I believe it is one of the top pre-war tobacco sets of all time.

The cards aren’t as sturdy as other tobacco issues. They aren’t paper thin but a little thinner than other tobacco cards and have a light semi-gloss. While the set includes a large number of non-sports subjects, it has a good number of sports cards, too, from various sports, including boxing, golf, cycling, soccer, rugby, cricket, and more.

Backs of the cards indicate the total number included in the set. Each series states how many cards are in each one:

A couple of notes with regards to the series. First, while they all generally looked the same, the captions and backs differed a little. In addition, some subjects were repeated in different series’. 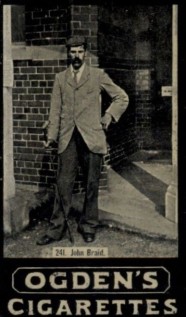 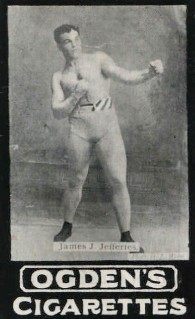 Cards have distinctive black borders, which helps them to stand out from other tobacco cards of the era, which often used white borders. The Ogden’s Cigarettes name is printed at the bottom (or, in the case of horizontal cards, the side)

The set is popular among boxing fans as numerous boxers are included. More on the boxing cards can be found here.

However, there’s plenty more than boxing here. The set also contains other sports, including golf, soccer, wrestling, and hockey, as well as a slew of minor sports, including things like cricket, horse racing, cycling, and water polo. The sports are spread out across the series, so it isn’t a matter of limiting one’s focus to any given series to collect only the sports cards. Several rookie cards of athletes are found here, including one of boxing legend James Jeffries.

In addition to boxing, other sports cards in the set are very desirable. The set is also popular for golf collectors. As I recently wrote, three of the earliest, most famous golfers (Harry Vardon, James Braid, and J.H. Taylor) are in the set. Early black cycling star, Major Taylor, who has been introduced to many collectors in a recent television commercial for Hennessy, is also included and his cards can sell for around $50-$100 or more, depending on condition. It also features both male and even female wrestlers.

Another key in the set is W.G. Grace, who is known as one of the greatest cricketers of all time. Grace’s name is not a big one in the U.S. because the sport hasn’t really developed here on a professional level. However, Grace’s name is certainly known around the world and his cards often sell for good money.

It is important to note that Ogden’s created a separate set with the same design at the same time featuring only boxers. That set is called Heroes of the Ring and, also printed in 1901, is much rarer than the boxing cards from the General Interest issue. Boxers appearing in both sets share most (if not all) of the same images, making them difficult to distinguish from only the fronts.

The set was a multi-sport issue and also contained non-sports subjects, including some animals, actors/actresses, comedians, and other famous subjects.

Like other tobacco cards, you can often find these trimmed. Many collectors, apparently wanting to distance the cards from the tobacco company, removed the Ogden’s Cigarettes name from them.

However, there are no cards above No. 350 with a Series C designation, so what gives? Many collectors believe the 470 cards was cited in error. However, a separate subset of General Interest cards numbered 1-120 actually make up the remainder of Series C, giving us a total of 470. 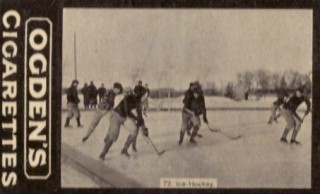 An Ogden’s Tabs General Interest hockey card is of interest to many as it is one of the earliest cards from that sport.

The known hockey card has a black and white image features several unnamed players on the ice. It is sometimes cited as Card No. 72 in the Series E set as PSA has slabbed this card as such. However, it is really a part of the Series C set.

Series C has a total of 470 cards but the final 120 (starting at No. 351) are actually numbered 1-120 and do not show a Series C designation. This hockey card is part of that grouping.

In lower-grade condition, the card generally starts at around $15-$20.

It should also be noted that while many of the non-sports cards may not be significant to most collectors, some important ones are found. A card of assassinated president William McKinley, for example, exists.

Other intriguing non-sports cards are found, too.

Collectors seeking sports cards should also be aware of what they are buying. For example, card No. 113 in Series B. features a man named George Robey. Robey is pictured on a bicycle and it could be assumed that he was a cyclist. However, Robey was actually a comedian. Other similar cards could exist for other non-sports subjects. 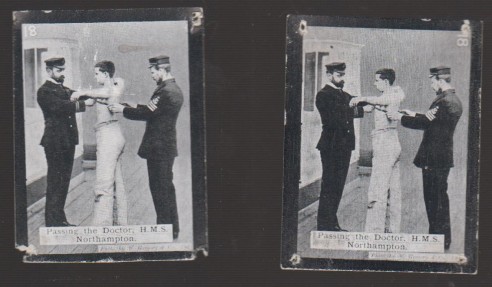 The Ogden’s General Interest set has some variances to it.

For starters, the exact size of the cards can vary a little. While most measure around 1 1/2″ wide by 1 3/8″ tall, some are slightly larger. Typically, those measure a little wider, if anything. That isn’t too uncommon as many pre-war sets have similar types of variances in size.

Another interesting thing is that other variances exist, including even the placement of the card numbers. Some of the card numbers are printed on the front, including the cards in Series D. These cards shown here are both No. 18, picturing a ship’s doctor on the H.M.S. Northampton. The cards look similar but if you look closely, you can see the placement of the card numbers is in different corners on the pair. On has the number displayed vertically in the upper left corner and the other has it displayed horizontally in the upper right corner. I have seen this number placement variation on several cards.

Finally, Series E cards were printed on different card stock. Those cards are similar to the others but have a glossy finish and some appear to be on slightly thinner stock. Additionally, the style of font in Series E and Series F varies from the font in the other series’.

Here’s a closer look at all of the variations with this issue.

Finally, collectors should know that at least two other Ogden Tab General Interest sets also exist. The cards have an almost identical look to the 1901-02 set and are often confused with those cards. They are generally cited as having been printed in either 1900 or 1902. But while the cards look similar they were not broken out into series and do not indicate a specific series on the back. This is where the aforementioned hockey card is found.

Some cards appear to be part of a set of 120 and indicate that on the back. Those are also numbered. Other cards state they are part of a general interest set but do not have any numbering on them and the backs do not state how many might be in a potential set.