The 1901-02 Ogden Tabs General Interest set is one of my later discoveries. I’d heard about the set for some time, but just started collecting it only this year.

Collecting the set, if you’re not aware of it, can be quite tricky. It’s not only difficult to collect because of the 1,500+ cards in the six series’ in it, but for new collectors, it’s tough to even tell what is a part of it. In short, Ogden’s created numerous lookalike sets and it’s easy to get them mixed up.

One really interesting quirk about the set are the numerous variances, even within the Ogden Tabs General Interest set. Here’s a look at some of those. 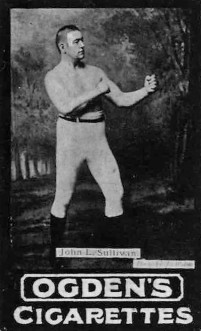 Simply put, there is no standard size for these cards. If anyone tells you there is, they are either lying or don’t know. Typically, they are about 1 1/2″ wide x 2 3/8″ tall. But those dimensions are relatively loose as the exact measurements are all over the place.

Some are significantly wider or taller than others. The best way to see this is to take a stack and hold them together. You’ll quickly find that you don’t get a perfectly flat edge on either side because of the differences.

And if you’re like me and keep your cards in binders, you’ll easily be able to see the size differences there, too. If you are using the standard 20-card pages, that becomes immediately evident when you start filling them. Some cards will go in quite easily while others will be a bit of a struggle due to some larger widths.

If you are not a fan of altered cards, that immediately becomes a problem. The reason is because it can be extremely difficult to detect trimmed cards.

Those size issues, by the way, say nothing of the more drastic problem you will encounter in this set. Many times, collectors cut off the name of the tobacco sponsor and this set is no exception. So instead of cards with the Ogden’s Cigarettes name, often you will see these with a shortened black border with that name removed.

Most of the Ogden’s cards appear to be printed on the same type of card stock. At least one exception, however, is known in Series E and part of Series F. 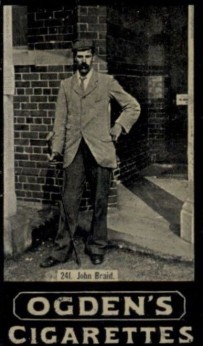 While the Ogden’s name and outline box on the front is generally in a bold white ink, in some examples, the line is thinner with the font a bit smaller.

Additionally, the layout and fonts vary slightly across the six series. Series A, B, C, and D also have a thicker Ogden’s print and the thicker border line around the Ogden’s name. Series E cards instead have a thinner Ogden’s name and border line. In addition, Series F is split. The first 200 cards in the series have the thicker name/line while cards after that have the thinner font/line. That follows the card stock/hue comments mentioned above.

Two examples here show off the thicker font vs. the thinner font.

In addition, some of the fonts in the names of the subjects vary across the sets and some card have numbers on the front while others have them on the back. More on that in the next section. 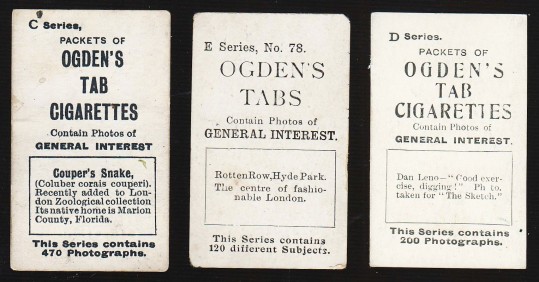 In general, there are three types of backs across the series’.

Most backs have the Ogden’s Cigarettes name in a narrower, more bold type of font. This style is found in Series A, B, D, and part of the Series C and Series F cards. However, some others are different (picture on right).

In particular, cards in Series E and Series F cards numbered above 200 have the Ogden’s name in larger, wider, but thinner lettering (middle picture). Finally, high-number Series C cards have a separate back. This one has the Ogden’s name in a narrow font but is much bolder than either of the other two types (picture on left).

Even in the same series with the same cards, variances can be found.

For example, look at these two cards, titled, ‘Passing the Doctor, H.M.S. Northampton’ from Series D. This card appears to show a sailor getting some type of medical examination. The cards, you’ll notice, are practically similar. But if you look closely, you can see a difference in the placement of the card number on the front.

I have seen this variation on several cards.

Arthur Roberts was a popular English comedian. The Ogden’s Tabs General Interest set includes several such figures and he made it into the set. In fact, Roberts is found three times in Series B alone.

Three of those cards were surely intentional as they feature different poses from the film H.M.S. Irresponsible. On Card No. 35, he is pictured in a military uniform. On Card No. 36, he is shown, shoddily dressed in an ill-fitting suit. On Card No. 37, he is shown in another military outfit. Those three cards are shown left to right here.

However, the numbering on these cards is kind of a mess. The first card shown is printed with both card numbers 35 and 36 on the back. The second card is card number 35. The third card is known with numbers 36 and 37. Keep in mind, those are the numbers I have seen on these cards. It is possible that even more card numbers are found on the backs. In fact, given the large number of cards and quality control issues with the set, I’d be surprised if there wasn’t.