While the origins of golf date back to the 15th century (and, by some accounts, as early as the 1300s or even earlier), you won’t find trading cards of golfers that old. Even though the sport had technically been around for centuries, notable golf cards didn’t surface until the late 1800s.

When a lot of collectors think about early golf cards, Bobby Jones and Walter Hagen are usually some of the first names mentioned. But golf was around long before they showed up and there are earlier golf cards depicting stars that came before them.

As is the case with most sports cards, the earliest golf cards were probably cabinet cards or trade cards from the late 1800s. A golf card in the 1878 Huntley and Palmers set is often cited as one of the very first. But the most notable early golf cards are from even later as those are primarily generic issues not picturing actual players. Particularly, collectors will find cards of the sport’s earliest stars in early tobacco card sets. 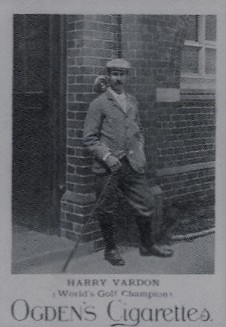 Harry Vardon, John Henry Taylor, and James Braid make up what is known as the Great Triumvirate. The three British golfers dominated the sport winning 16 of the first 21 Open Championships. The trio was so impressive that at least one of them even finished as the runner-up in the other five Opens. In particular, Vardon was sometimes viewed as the sport’s best player and his six Open titles remains the record for the event more than 100 years after he set it. All three are in the Golf Hall of Fame.

Simply put, these were the guys when it came to British golf in the late 1800s and early 1900s. And while they have some later stuff, it’s their early cards that commands the most attention.

One of the earliest sets is dated to the late 1800s, though some have suggested they could have been printed slightly after that. Whatever the case, many of the found in the Ogden Cricketers & Sportsmen cards are generally viewed as rookies.

The set includes cricketers and other athletes and, of the three golfers, Vardon is the only one included in it (his card is pictured left here). It is usually dated to either 1898 or 1899.

Today, these cards are more commonly seen in reprint form. Originals of them do exist but they are scarce. How scarce? Well, to date, PSA has only graded four cards in the entire set and no Vardons. Even coming up with values on these cards can be incredibly difficult just because of how infrequently they are offered. Cards of the cricketers and other athletes do not break the bank and can sometimes be found for as little as $10-$20. A lot of four, for example, sold on eBay in 2018 for only 25 pounds (approximately $32 USD at the current exchange rate). But Vardon’s card would likely sell for hundreds.

Another very tough, very early set is the 1900 Cope’s Golfers release. These colorful cards stand out against many other issues that were black and white.

The Cope’s Golfers set is comprise of a mixture of cards and is also a rare issue. Some featured real golfers while others featured various golf shots and clubs. While some other early standout golfers are included in it, of the three discussed here, only Taylor is featured (pictured above on the right). His card, even in low-grade condition, will usually still for $100 or more.

Fortunately, not all stuff is as rare as these two sets.

More common cards are found in other Ogden’s sets. The three golfers certainly had other early issues but their Ogden’s cards are among their most famous and some of the easier ones to find. The sweet spot, so to speak, for collectors of these players will often be these cards. They are not incredibly easy to find but are not scarce.

The 1901 Ogden’s Guinea Gold cards are viewed as potential rookies of Braid. Taylor and Varden are also included but their earlier cards mentioned above came first. These cards are popular with early golf collectors. They feature clean black and white images and are distinctive with their black borders, like some other early tobacco sets. Similarly, the 1901-02 Ogden’s Tabs General Interest set includes the trio. Those, too, aren’t too bad from a price standpoint.

Both sets are similar, but different, as shown here. The Guinea Gold cards were packaged with that brand of cigarettes, which were produced by Ogden’s. And the Ogden’s Tabs cards were distributed by, you guessed it, Ogden’s Tab Cigarettes brand. While they are similar in appearance, they are easy to distinguish. The Guinea Gold cards have that name written in more of a cursive script. By comparison, the Ogden’s Tabs cards have more of a block print.

One interesting fact with regards to these two sets is that Braid’s name is misspelled as John in the Tabs release. The Guinea Gold set lists him as J. Braid, which, of course, is acceptable and not incorrect.

In addition, some of the Ogden’s cards have more than one subject printed on them. For example, one card features Vardon and Braid in a match. While that might seem like it could increase the value of the card, that typically is not the case. Cards for Vardon and Braid individually are generally a bit more desirable than these.

Part of the reason for that is probably because the pictures of the golfers are smaller and not identifiable on these ‘action’ cards where more than one is seen. Really, they are somewhat similar to the old ‘In Action’ cards of players produced by Topps. Typically, cards of the individual golfers from the Guinea Gold and Tabs sets will start around $20 in lower-grade condition while the action shots featuring more than one will often start a little less.

Finally, if you’re into more recent  cards, the three are in a slew of other sets. Notably, you’ll find them in some popular 1920s and 1930s cigarette card sets. One of those that includes all three is the 1927 Churchman Famous Golfers set. That set includes sepia photos of the sport’s most popular golfers and Braid, Taylor, and Vardon all have more than one card in the set.

The 1931 Churchman Prominent Golfers set is another one with all three golfers. That set is popular as it includes color caricatures of the golfers as opposed to the real black and white images seen in most other sets.

Churchman was a popular cigarette company issuing sets in the 1930s. But while a lot of those are inexpensive and easy to find, these two issues are tougher and, as a result, more expensive than some other sets. Still, that is by comparison with other 1930s sets that are often very cheap. Comparing these with earlier cards of Braid, Taylor, and Vardon, these are very affordable, often around $10 or so.