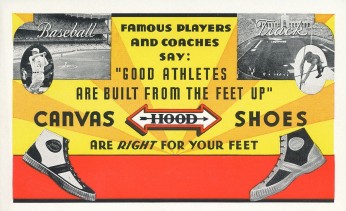 Ink blotters were generally rectangular cards that were popular in the days of fountain pens. They would usually be kept on desks and were used to allow people to wipe off excess ink. To properly absorb the ink, blotters are generally a little thicker and have a different texture than traditional cards.

This blotter was an advertisement for a shoe company, Hood Shoes. It is notable for its picture of Hall of Fame baseball player Jimmie Foxx and an unidentified track and field athlete. A slogan on the card reads, “Good athletes are built from the feet up” and pictures of the company’s shoes are shown as well.

While not standard trading cards, blotters with sports figures are absolutely collectible. Because they were used to absorb extra ink, you will often find them with ink spots all over them. Ones that haven’t been covered in ink demand a premium.

Blotters were generally an advertisement for a specific product, service, or organization. Along with a picture of a sports figure or team, they usually sought to promote some type of product or business.

This is a standalone issue and not part of a set.