Sports a Highlight in 1937 Wills Our King and Queen Set

The 1937 Our King and Queen set is one of numerous Wills cigarette card sets from the 1920s and 1930s. The set features King George, Queen Elizabeth, and their two children, Elizabeth (now Queen Elizabeth) and Margaret Rose.

The set isn’t bland, per se. It just happens to look like many other UK cigarette cards that all basically had the same appearance. These cards featured real black and white images with white borders and a title at the bottom. The backs included a description of the image.

Most of the cards are non-sports related. They feature the royal family participating in a variety of activities, making visits, etc. But a few featuring King George are very much sports cards.

The two most notable sports cards are ones featuring the King playing golf and tennis. The golf card is titled, “A Game of Golf,” and pictures the King playing the sport in 1924 — 13 years prior to the release of this set. George was not even King then. As the back of the card states, he was the Duke of York. He is shown hitting the ball off the first tee at Ton Pentre in the Rhondda Valley.

George was an avid golfer as the card also mentions he was captain of the Royal and Ancient Golf Club at St. Andrews.

The tennis card is nearly as popular as the golf card. On that card, George is shown clinging to a racket with a towel wrapped around his neck.

The tennis card is popular not only because tennis is a popular sport. It also draws interest because it actually features George at Wimbledon in England. And, believe it or not, George was actually a participant in the men’s doubles tournament at the historic venue.

Like the golf card, the tennis card includes a picture that was more than a decade old. King George is shown after the doubles match in 1926 when he teamed up with Wing-Commander Sir Louis Greig. But the duo was predictably defeated by Arthur Gore and Herbert Roper Barrett. Gore and Barrett previously won the doubles title at Wimbledon and were both Olympic gold medalists in the sport. Additionally, Gore is a Tennis Hall of Famer.

The tennis card isn’t quite as desirable as the King’s golf card but is roughly valued at the same. 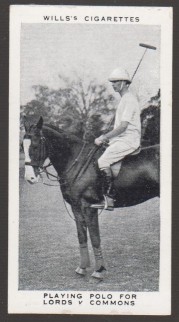 A third major sports card is included in the set, though it doesn’t depict the King as a participant. Rather, he is a guest at the F.A. Cup tournament. This card pictures George at the 1924 event meeting participants from the final match between Newcastle United and Aston Villa.

Another sports card in the set features King George playing Polo. While no date for the image is given, this card again pictures George when he was still the Duke of York. He’s shown atop a horse in the image with the card titled, “Playing Polo for Lords v. Commons.”

The back of the card mentions George’s love of sports, including golf, tennis, and polo — sports that he played since he was a child. The card also mentions a strong interest in swimming. Here, he is pictured at the match, which took place at Ranelagh Club. The match was for the Harrington Challenge Cup.

A few other minor sports cards are included in the set, too. One shows the King as an aviator along with his tennis partner, Greig. Another features the King at an event called the Y.M.C.A. Sports Carnival. Finally, other cards show the King deep sea fishing in New Zealand and on a hunting trip. All in all, sports are actually a fairly large subset of the set, making up nearly 20% of it.

All of the cards in the set are relatively affordable. The tennis and golf cards can sell for $5-$10 while the other sports cards are a bit less. Complete sets can often be found for about $20-$25 or sometimes even less.