1937 Wills Our King and Queen Set and Checklist

1937 Wills Our King and Queen Overview 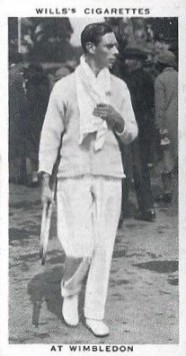 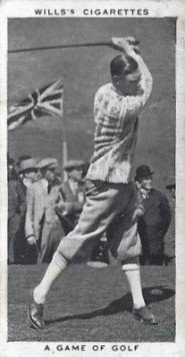 This set featured the Royal Family and was issued by the Imperial Tobacco Company for their Wills Cigarettes products. Distributed in 1937, the set included 50 cards showing the family in various settings. The black and white set features, specifically, King George and Queen Elizabeth, known as the Queen Mother.

Most of the cards are decidedly non-sports issues, featuring the family making charitable visits or at other events. However, some are considered sports issues. Specifically, four cards in the middle of the set are considered golf, tennis, soccer, and polo cards with King George playing or serving as a spectator.

One notable aspect of this set is that the pictures are from many different years. So some of the cards depict the Royal Family before they became king and queen. Several of the King’s cards, for example, depict him as the Duke of York.

Like most Wills issues of the time period, these have a white border with the Wills name featured prominently at the top. The set is one of the heavily produced UK releases of the 1930s. But while the non-sports cards have minimal value, the sports cards featuring King George sell for a bit more.

Here’s a closer look at the sports cards in the set.

1937 Wills Our King and Queen Checklist