Stollwerck Chocolate cards tried to predict the year 2000. It didn’t work out.

Stollwerck Chocolate cards were one of many international early candy cards produced in the early 1900s. They are more well known than some issues because there were so many. The German-based chocolate company issued six-card sets and there are more than 5,000 different cards. I wrote about this series recently and you’ll find more information here.

The cards must have been popular to last so long. More than 3,000 different cards were printed from the late 19th century through 1916, which was quite a lot compared to other sets. So you can imagine that the company started running out of content. They’d printed cards of sports, famous people, fashions, children, scenery, military men, animals, plants, and just about anything you can think of. And along the way, they got the crazy idea to print a series based on what life would be like in the Year 2000. The set is titled, Im Jahre 2000, which translates to In Year 2000.

That’s right — before we had a fascination with Y2K starting in the 1990s, Stollwerck was way ahead of the game, wondering what life would be like as we entered a new century. They issued six cards (Series 31) offering ‘predictions’ on the year so let’s see how accurate they were.

I’m glad Stollwerck started with this card because it’s a good way to ease into things. The set only gets progressively weirder from here so let’s start off nice and slow.

This card is titled Eine Hauptstrasse, which is essentially translated to the main drag. Here, Stollwerck tried to replicate what a 21st century Main Street would look like in a big city. And if I’m being honest, it’s surprisingly accurate.

You start with a scene of several vehicles in the middle, representing a good bit of traffic. Large buildings provide a common, albeit crowded, cityscape, and there are even some sort of rail cars that are traveling along a structure. All of this is pretty typical of what you’d see in a large, modern city. There are some odd looking things in the sky but ignore that for now. This card gets a pass from me so Stollwerck is a tidy 1 for 1 here. 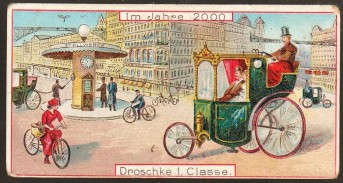 The next card is another one focused on transportation. This one titled, “Droschke I. Classe” is supposed to represent a first-class cab ride.

Now it’s a little deceiving. No, our cars don’t look like this, really. But if you pay closer attention, you see there are some realistic features. First, it’s a motorized vehicle of some sort. We know that because while it looks like a buggy, there isn’t a horse or animal pulling it.

And the guy over to the left even has his car hooked up to something. Dare I say, a charging station? Eh, maybe not but who can tell? The cars, as stated, don’t look quite like ours but I think this one is fairly close. I’m again giving Stollwerck the benefit of the doubt here. So far, they’re 2 for 2.

3. A Trip Around the World

“A Trip Around the World” — who among us wouldn’t sign up for that?

Stollwerck proves that idea was very much a fashionable one to think about in the early 20th century. But is this card accurate?

They begin by depicting air travel and that is a great start. But after that, there are too many things wrong. We’ve got other flying objects, floating buildings in the water, and the primary features of the ‘plane’ are a salon and a dining room. While you might see those on cruise ships or even trains, those sorts of things don’t really exist in our air travel. Plus, the flying craft doesn’t seem to be motorized and just looks like a giant blimp. Hard pass.

Stollwerck’s big problem with this card is that it’s a flying craft. Had they made this a cruise ship, it would have been a lot more accurate. Some intriguing features but this one’s a miss.

Depending on what part of the world you live in, a sanatorium can mean either a medical facility or a recreational resort. They were usually known for the former — medical facilities to treat long-term illnesses. But in either event, Stollwerck mostly misses the mark here.

On this card titled, “Sanatorium in hohen Regionen” (Sanatorium in high regions), we’ve got another flying structure. There’s an enclosed part with large staircases of people traveling up to an outdoor area. And yes, that sounds terrifying given there don’t appear to be any sort of enclosures around the staircases. Plus, we’re again back to air travel via a blimp like structure.

Yeah, so this is my favorite card in the set. It’s also the most outlandish one.

Titled, “Unsere Polizei” (Our Police), here we’ve got a policeman chasing down what looks to be a thief. Said thief is toting some sort of magical looking box and well, that all seems fine except everyone is flying.

The thief is adorned with some sort of less fashionable Bat Wings while our hero, the policeman, is in hot pursuit with his trendier red wings. Other people are flying on the card, too, which is sort of a theme in this set, if you haven’t noticed.

While humans flying around like this is an idea that’s been around for a very long time, we’re not really there yet. And our policemen certainly aren’t chasing down criminals up in the clouds. Sorry, Stollwerck. You tried, tho.

Our last card is a lot less fun but mostly also a swing and a miss from Stollwerck.

Card No. 6 is titled “Ein Reisehotel,” which essentially means a mobile hotel.

Here, we’ve got a large, mobile hotel that is equipped with a salon and a bar. Sure, those things are found in hotels. But our hotels aren’t really riding down streets.

We’ve got some bicyclists and even some trolley cars, and such. But, no — our hotels are very much stationary these days. That brings Stollwerck’s final tally to a disappointing 2 for 6 in terms of accuracy.

I don’t know. I’ve got a hard time being too hard on them. After all — trying to predict what the Year 2100 would look like isn’t easy. Still, Stollwerck’s 2000 predictions leave a lot to be desired.