The Long and Winding Road of Stollwerck Chocolate Cards

Stollwerck cards spanned more than a century and are, quite literally, all over the map

There are sorts of quirky international card sets that run the gamut when it comes to subjects. The one that comes to mind the most for me are the Ogden Tabs General Interest cards and, additionally, their Guinea Gold cards. The Guinea Golds were basically an offshoot of the Tabs cards and included many of the same subjects and images.

But those are tobacco cards. And while Liebig dominated the food cards, when it comes to a candy company with the most madness going on, it might be the Stollwerck Chocolate cards.

Stollwerck, it should be pointed out, is still in existence today. They were founded in 1839 in Germany and are approaching 200 years of business. The company is named for founder Franz Stollwerck, who initially began by producing ‘cough sweets,’ according to their website. Chocolate making came about in 1860. By 1902, the company had become a world wide operation of sorts, opening plants in several countries, including England, Romania, and the U.S.

A History of Cards … and Designs

Stollwerck turned to cards as a way to help promote their business. But instead of standard, random individual trade cards, the company issued full sets with six cards in each one.

Now, what constitutes a Stollwerck set can be different things to different people. Some collectors group these small sets together and consider them larger sets. But for the most part, they are in groups (Gruppe or Serie in German on the back) with most comprised of six cards — and that’s what most collectors mean if they are talking about a Stollwerck set.

I’d studied the cards for some time but recently, picked up a bunch of them from a collector recently. That sort of drove me to research them further. And while I realized they were all over the place to a degree, things were even crazier than I thought.

This helpful site has a breakdown of the number cards by album (Stollwerck issued albums to hold the cards and each album held numerous 6-card sets). The cards apparently began in 1897 and were issued heavily through 1916. Why did the cards end then? No one can say for sure, though, the fact that it was in the middle of World War I possibly had something to do with it. And that Stollwerck had another big break in 1939 when World War II broke out, that seems to explain things rather neatly. I’ve not seen a full checklst of sets yet but there are more than 500.

As I covered before, few sports card sets were issued during that time. After a strong run of more than 500 more cards, production really dropped off after that. Production again ceased in 1939 (just as World War II was beginning) and it was another 20 years before Stollwerck would issue more cards. They issued some through the 1990s but production on them has been quite small compared to the large number of cards churned out in the pre-war era.

All told, that site linked above says there are more than 5,400 of these gems.

The first thing you notice when looking at these cards is you realize how varied the designs are. With cards produced over a century, you’d expect some mix of styles. But many cards were issued in a much shorter time period. More than 3,000 of the cards, after all, were printed in that 19-year window of 1897 through 1916. And the designs, even in that time, ranged quite a bit. Shown above are some of those.

The backs varied, too. And what’s notable is that, even in the same six-card set, the backs were not always uniform. Some cards with the same Gruppe (group/set) number surprisingly have different back designs.

I haven’t studied these cards enough to know if different backs were used for the same fronts — as is found in the popular T206 baseball card set. A scan of the dupes I have all showed the same backs. But, as mentioned, the backs of cards in even the same set varied, which is just plain weird. Here’s a sample of backs from various Stollwerck sets.

The cards have a very distinctive look, right down to the size. They are quite unique, looking a bit like jumbo-sized cigarette cards from that era, measuring approximately 1 7/8″ wide by 3 5/8″ tall. That odd size makes binder storage a little challenging since they are just a bit taller than today’s standard 2 1/2″ by 3 1/2″ cards that utilize the 9-pocket pages. Still, these fit pretty well in those and that’s my recommendation for storing them if you’re not using toploaders. They do hang out just a touch over the top so if condition is very important, you can always drop them in a semi-rigid holder and then put that inside of a four-pocket page (postcard-sized openings) instead.

So what’s in the set? Well, how about some sports to start? 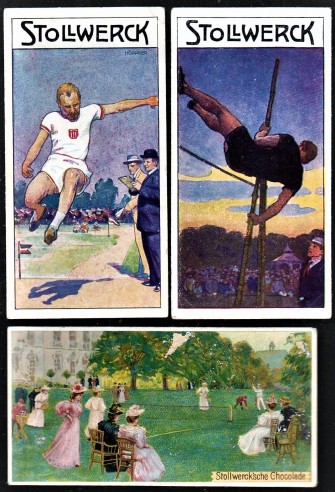 Sports cards are what most visitors of this site come for, so let’s start there.

If you’re interested in finding out what pre-war sports cards are in the set, you might be a tad disappointed. Some certainly exist. I know of roughly 100 and there could be more. But the point here is that the Stollwerck cards are largely non-sports issues. Here’s a small sampling of some I own, depicting early tennis and track and field.

Most, if not all, are generic subjects from what I’ve found. The pictures, for what it’s worth, are quite nice. There are six-card sets for tennis and track and field, at least. Then there are other individual cards for ice hockey, golf, tennis, and more. A set featuring women in sports from 1899 (Group 47) is featured. In fact, the horseback riding card in the upper right of the picture above shows a card from that series (the series also includes cycling, tennis, hiking, dancing, and ice skating).

Group 45 is another multi-sport set, featuring tennis, rowing, horseback riding, cycling, skating, and chariot riding. Even baseball is featured in a way — a card with sporting equipment has a baseball on it.

In addition, there are some series’ that include a sports card in a mostly non-sports set. For example, Gruppe 154 titled ‘Life Steps’ shows adults in different stages of life and includes a boy as a tennis player. Several other tennis cards are in mostly non-sports sets.

To date, these are the pre-war sports sets I have seen — though I have no doubt that others could easily exist (especially those of more minor sports). Keep in mind, these are sets with only sports cards — not ones mixed with non-sports cards. Each set is believed to contain six cards. Note that the dates provided are assumed to be correct but not confirmed. 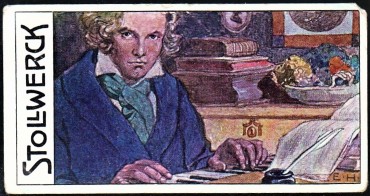 While sports cards are what many readers might pursue, cards of famous non-sports subjects might be the most heavily desired cards in the Stollwerck series — and there are a lot of them

Many of them, while legitimately famous, may not be all that desirable. Subjects run the gamut with musicians, rulers and politicians, scientists, artists, and more. And across the vast landscape, there are plenty of extremely popular figures, such as George Washington, Shakespeare, Beethoven (pictured here), Benjamin Franklin, Alexander the Great, Napoleon, Isaac Newton, Julius Caesar, Cleopatra, and a ton more.

Frankly, I can’t list them all because I don’t know them all. With 5,400+ cards, the one takeaway here is that famous, real-life subjects are very much a part of the Stollwerck sets. Some of the cards command a decent amount of money and certainly exceed some of the sports issues in terms of price.

A large part of the Stollwerck sets is just a hodgepodge of sorts. In fact, I’d argue that the majority of cards are just a random collection of subjects.

What kinds? All kinds.

Animals, for one thing, are a big part of the series’. So are things like buildings, landscapes, ships, places, and plants. Even cards of statistics. And then there are a whole slew of subjects that are not real people. Those really include all sorts of things with an emphasis on children. But there are plenty of generic adult subjects as well, including soldiers, knights, sailors, and a whole slew of characters.

While many of these cards are skipped over in terms of collector interest, there are several interesting cards that are in demand. Cards of famous structures like the Statue of Liberty, for example, are among this group.

Still — of the three groups mentioned here, these are really the bottom feeders when it comes to the Stollwercks. There is some demand for the more notable cards. But typically, these are the least expensive Stollwercks.