Each month, content gets updated on the Pre-War Cards site. However, while you see the regular articles that are posted, plenty of stuff is always being added behind the scenes. Much of this has to do with the updating of set descriptions and checklists in the database and each month, I’ll be posting to alert you to stuff that has been added or updated from the previous month.

Here are the items added/updated from the past month.

So what’s new? Well, other than rising prices, actually quite a bit of news floating around out there. 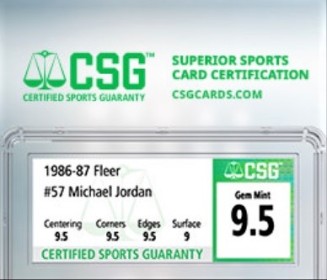 If you haven’t yet checked out CSG, I’d encourage you to give them a look (and not only just because they’re an advertiser on the site). One thing that I’d cited before in an article about what a fourth grader would need is name recognition. In fact, in this article, I mentioned it was the most important thing. That’s because there is such a disparity between the Big Three graders (PSA, SGC, and Beckett) that trying to get a legitimate startup of the ground to grab market share would be extremely difficult.

Keep in mind, it isn’t that collectors wouldn’t trust a company to grade their cards, mind you. It’s that they would be concerned that prices for slabbed cards of a new company would be drastically lower than one of the established ones — as it is now.

But while CSG (Certified Sports Grading) is a new name, they have been grading other collectibles, such as coins and comics, prior to this. They also went out and hired Andy Broome, Beckett’s primary vintage grader, which gave them instant credibility.

Will CSG cards be valued at on a scale of PSA, SGC, and Beckett? Only time will tell. But they are the best-positioned challenger out there to try to take market share from those companies.

Speaking of those other graders, the biggest news in the hobby this month may be that PSA instituted a heavy price increase.

As I said then, that was likely done to quell the heavy demand from collectors sending cards in to be graded. And while there has been such a demand already, it’s gotten much worse with prices for highly-graded junk wax era cards going through the roof lately. But while the move looks back, if PSA can still achieve the same revenue from doubling prices and working less, that’s a move that most companies would make and it may not even hurt them in the short term.

More bad news came in the form of eBay making a major change to its popular eBay Bucks program, eliminating the 1% earned on all purchases. eBay is still offering eBay Bucks offers sporadically (in fact, they just sent out an offer for 5% off) but the 24/7 1% earned is being eliminated, effective April 1.

Well, for starters, an Authentic grade Honus Wagner card once owned by former baseball player Joe Garagiola broke the record for the highest amount a card in that grade achieved. It sold for more than $2.5 million. It also appears as if a certain baseball trade card from the 1880s is not a card at all. And speaking of trade cards, one in particular really speaks to the large quantities in which they were printed. I also wrote a bunch of other articles that you’ll find on the main page.