How Many 19th Century Trade Cards Were Produced? A Lot.

I’ll admit it — while I’m primarily a tobacco and candy card set collector, I love trade cards. These Victorian style cards produced heavily in the late 1800s primarily served as advertisements for businesses. There are a wide variety of these but their distinguishing characteristics are generally that they are usually slightly oversized, printed on thinner stock, included lithographic style images, and that the same ones were often used by more than one business. Some featured sports but the majority did not. 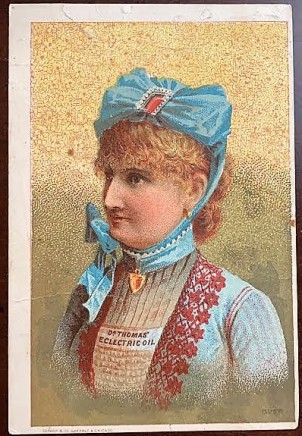 It is common to find a trade card image with a business advertised on the back and find that same card picture with a different business ad printed on the back. Printing companies printed these cards with blank areas on the front or blank backs and then they were sold to individual businesses to add their own name or message on them.

Even though these cards are very old, many are quite cheap. That isn’t always the case — some (often tougher sports issues) can sell for hundreds. But many non-sports trade cards that feature generic subjects are less than $10.

Why is that? Because there are a ton of them.

The quantity of trade cards sometimes surprises collectors new to 19th century issues. You might expect a card that old to be very expensive but the reality is that many of those cards were printed in such high quantities that, even today, there are many of them still around. And when you consider that these cards were printed on thinner, less durable card stock, that can be even more surprising.

But the fact is, there are still a lot of 19th century trade cards around. They are similar to things like the Old Judge baseball cards — finding any Old Judge card is not difficult to do but finding a particular one can be very difficult. I’ve always wondered how many of these trade cards were printed. Such a number, we can’t even wrap our heads around. But I stumbled upon a trade card recently that sort of gives us an idea how crazy high it probably is.

We don’t usually get a great idea of how many of certain types of cards were printed in the pre-war era. Every now and then, we get a glimpse. For example, the 1914 Cracker Jack baseball cards stated on the back that 10,000,000 or 15,000,000 (both are mentioned on different cards) were printed. For the most part, though, we’re in the dark on production.

This card shown here, though, is one that tell us explicitly how many were printed. 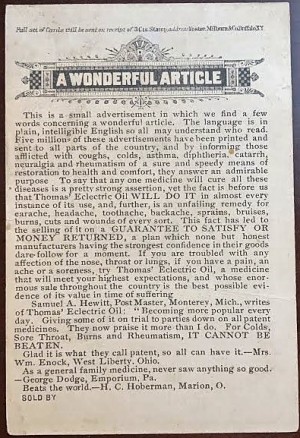 These cards, bearing the title, “A Wonderful Article,” on the back helped advertise for a remedy called Thomas’ Eclectric Oil. In the 1800s, all sorts of purported medicines and tonics were offered to cure practically anything. This was one of those and the cards indicate that it was a remedy for things such as coughs, colds, asthma, diphtheria, catarrh, neuralgia, and rheumatism. Thomas’ used these cards to push their medicine and they would have been used primarily by vendors offering the product. We know that from the bottom which has a blank space along with the words, ‘Sold By’ where a store or retailer could add their own name.

Now, that’s fewer than the Cracker Jack cards that would come about 25 or 30 years later. Still, considering this was just one type of trade card, it’s easy to see why so many are still in population today. There were, I don’t know, tens of thousands of different (talking different pictures here) trade cards printed? Hundreds of thousands? Millions? I mean, who freaking knows.

No one could say for sure how many trade cards were printed. But if there were five million of just these specific cards printed, you can easily get the idea of why so many are still around today.