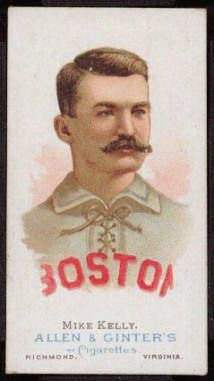 So, as any regular reader of this blog understands, I don’t do modern. I barely do any post-war vintage and, aside from a ridiculously large Dwight Gooden collection and modern graded wrestling cards, the modern game is really beyond my limits.

It’s not that I can’t stand modern cards. And I appreciate that they are needed to even grow the pre-war market. Mostly, between the flood of inserts/parallels, they’re just not for me. Still, one issue that’s sort of intrigued me over the years is Topps’ reboot of the old Allen & Ginter label.

Original Allen & Ginter tobacco cards from the 19th century are fantastic. You shouldn’t need me to tell you that. I’m about 2/3 of the way complete with the N28 and N29 Champions cards and they feature an assortment of athletes in all kinds of sports. All of the four Champions sets do. The baseball players are understandably the highlights but I get just as big of a thrill from adding a boxer, tennis player, or some other figure in these sets with all kinds of variety. And the nutjob stuff in the N184 Kimball Champions set is downright tremendous.

Those are just the sports issues, of course. In all, Allen & Ginter was known for producing a mess of all kinds of non-sports sets. True to that history, Topps’ Allen & Ginter sets include a number of subjects including athletes and, well, a ton of non-athletes. The sets are so vast and so inclusive that there are even running gags of which not-even-D-List celebrity is going to find his or her way into the set.

Now, the Topps Allen & Ginter sets are still beyond my level of interest. I keep an eye on them but don’t buy or collect any. Realistically, I’ve got my hands full with actual period Allen & Ginter cards and between the numerous Topps parallels, minis, and inserts, it’s way too jumbled for me to even try to pursue. Still, I’ve come to appreciate the modern reboots for their somewhat banal designs, thicker-than-usual cardboard feel, and oddball checklists, which Allen & Ginter was sort of known for.

On Tuesday, it was announced the set is getting a bit of an overhaul as the Topps cards are apparently going to include a Chrome version.

Chrome, if you’re unfamiliar with it, is sort of a premium version of Topps cards. The card designs parallel the regular Topps cards and they’re really a souped up, shinier version of those. They’ve got a metallic look and are just a fancier version.

This is nothing new, of course, as Topps has affixed the Chrome brand to a lot of stuff. But this for the Allen & Ginter cards, which have mostly had a throwback sort of vibe, just feels … cheap.

It can, of course, be argued that Topps has already sullied the name by the reboot of the cards as it is. After all, if we’ve got parallels and inserts in Allen & Ginter already, what’s the problem? I won’t necessarily argue against that point. But keeping the Chrome label away from them and giving the cards a more realistic vintage feel was at least paying some sort of homage to the legacy and the tradition of the set. At least it felt that way. Producing a Chrome version of Allen & Ginter cards these days just sort of changes the entire feel of what is a historic brand.

This isn’t the first time this has been done, of course. Topps has been remaking T206 cards for some time and those, of course, are not true to the original T206 issues, either. Still, even beyond my own personal preferences here, from a pure branding standpoint, this doesn’t seem to make much sense in terms of how Topps has produced the cards to this point. Yes, there are inserts and too many parallels to count. But adding a Chrome version of Allen & Ginter is sort of a final middle finger to a very special set with a lot of history that Topps really seemed to treat a bit differently.

As I said on Twitter, I have no doubt that this was carefully researched and that consumers made it clear that such a product would be well received. And at the end of the day, Topps is not in the business of respecting baseball card traditions. They are in the business of making money. This will make money. This very unofficial poll seems to show some amount of collector angst about the product but I have little doubt it will actually sell. Topps has not remained in business this long by being stupid. This, no doubt, was carefully researched and studied in advance. And I can respect their need to make a buck.

But as a collector with a real appreciation for the original Allen & Ginter cards and their fantastic history, it all just seems a bit much.