Each month, content gets updated on the Pre-War Cards site. However, while you see the regular articles that are posted, plenty of stuff is always being added behind the scenes. Much of this has to do with the updating of set descriptions and checklists in the database and each month, I’ll be posting to alert you to stuff that has been added or updated from the previous month.

Here are the items added/updated from August. 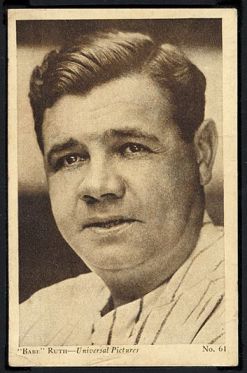 Dare I say it but things were relatively quiet around here last month.

Don’t get me wrong. I still wrote quite a bit and added some new set reviews to the site. But things were relatively … calm?

No real discoveries to speak of that I can recall. About the closest thing I mentioned here may have been a movie card set featuring Babe Ruth that is commonly dated incorrectly. Even that isn’t a true discovery … mostly just pointing something out that many collectors don’t know about.

From a news standpoint, the most noteworthy thing there was probably the National. But even that was relatively drama free given what some thought could go down with the whole altered cards scandal. Speaking of that scandal, USA Today also got in on the act with some coverage. Finally with regards to altered cards, bleached cards are getting called out a bit more.