The mostly non-sports D32 Drake’s Movie Card set would not be on the radar of sports fans if not for a valuable card of Babe Ruth. Ruth’s card, as expected, is the key to the set and is quite pricey. Even in lower grade condition, it easily tops $1,000. As a point of comparison, a PSA 1 sold in an REA auction a few years ago for nearly $2,000. The card is rare, expensive, and …

The set is dated to 1925 in most references and has been graded (and, for all I know, could still be graded) as a 1925 issue by both PSA and SGC. That is somewhat understandable because it is called a 1925 set nearly everywhere. But the set is not from that year. 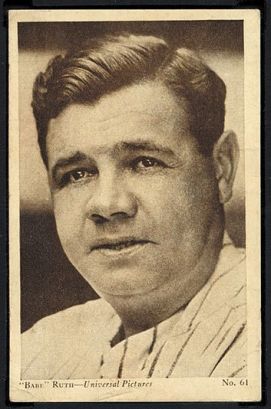 We know that, in part, from Ruth’s own card. I’m surprised it hasn’t been picked up on elsewhere very much but Ruth’s card indicates he was a Universal Pictures star. Now, Ruth was with that company, appearing in some films, but not until 1932.

Ruth’s next movies, however, were all with Universal (either produced or distributed by). These were shorts and all came out in 1932. In all, there were five of them — “Fancy Curves,” “Just Pals,” “Over the Fence,” “Perfect Control,” and “Slide, Babe, Slide.” Ruth then appeared in a 1937 film called “Home Run on the Keys” that was with Warner Brothers.

There is other, even more conclusive proof, though, that tells us this is not a 1925 set. As Movie Card states, some of the movies credited on the cards not even released until 1932.

Given the release date of those films and Ruth as a Universal star, this has the look of a 1932 set. It could not have been released sooner given that evidence and, with Ruth appearing as a Warner Brothers star in 1937, would not have come after that year.

I’m not sure where the 1925 date came from and why so many sources latched onto it. Perhaps one of the movies mentioned on a card was from that year and it is possible that this could be a multi-year set if that happened. But given the Ruth card and the other movies mentioned, 1932 seems to be the best date for this release.

That leads me to another issue with this card, and that’s its value. It has been pushed as a 1925 set, which ultimately made it a much earlier card. And, all things equal, a 1925 Ruth card is going to be more valuable than one produced near the end of his career. Could the card be overpriced?

Maybe. Owners of the card would probably point to its undeniable rarity, however. That could mean the date does nothing for its value. But in any event, the 1925 date attributed to it is simply not correct.