Hall of Famers, Olympic gold medalists, and even a famous aviator are among the keys found in a rare tobacco card set

The cards, if you’ve never seen them, are stunning in person. Gold foil is heavily used throughout the set as is a series of complex patterns on these embossed cards. These are often referenced as being among the most beautiful pre-war cards of all time.

The set is often called a movie stars issue for a number of reasons. For one thing, it features plenty of them in it. The set, spanning a total of 600 cards over two series, in fact, includes mostly movie stars. But the keys to the set for non-sport collectors are in the dozens of athletes that are included. 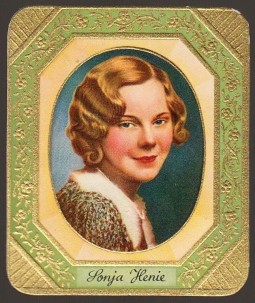 Among them are Hall of Famers, tennis players, track and field stars, and more. Many medaled in the Olympics.

Several Hall of Fame athletes could be considered the key ones. At the top of the list are tennis Hall of Famers Helen Wills Moody and Peggy Scriven. Champion ice skater Sonja Heine is also there as is diving champion Dorothy Poynton and legendary swimmer Georgia Coleman. To different collectors, each of these cards could be viewed as the top sports card.

Many of the athletes are less known but just as successful. For example, the set includes a card of renowned skier Christl Cranz. Cranz dominated her competition like few others and won an astounding 12 world championships in only six years. In the 1930s, she was arguably the most famous athlete in the sport and she was later named to the Hall of Fame of International Women’s Sports in New York.

But just as big as some of the names in the set are a few of the stories of other athletes found here.

One of the athletes with a most interesting story is American swimmer Eleanor Holm. She was a gold medalist in the 1932 Olympics but, on the trip to Germany for the 1936 games, she was said to be intoxicated (a claim she denied) and was not allowed to participate, despite being a favorite to win. She later appeared in a movie and was inducted into the International Swimming Hall of Fame.

Another notable story is that of a woman named Hanna Reitsch. Reitsch is one of the many aviators in the set. She is regarded as the first woman to fly a helicopter and set dozens of flying records in her lifetime. However, she is most known for being a Nazi test pilot during Adolf Hitler’s regime in Germany and, while often accepted later in society, she had a complicated history because of her dedication to Hitler and Nazism. 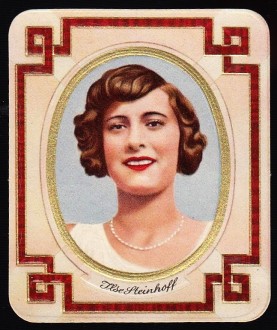 Finally, a few personalities in the set are not athletes but were tied to them.

For example, the issue includes several cards of actress Anny Ondra, wife of boxing legend Max Schmeling are also in the set. In addition, the set also includes a card of Ilse Steinhoff.

Steinhoff’s name is not known to most but she was a famous photographer who served in that capacity in the 1936 Olympics. That event would have come after the production of this set and she would also later be renowned for her photography during wartime. Steinhoff’s inclusion is interesting as, assuming the 1934 date of production for this set is correct, she would have been only about 25 years old. She must have been recognized for her work prior to the 1936 Olympics or the commonly cited 1934 date of issue for this set could be wrong.

Despite the beauty of these cards, they are generally affordable. Cards featuring the big name athletes and the more popular actresses are the most expensive. Even then, most of those are usually in the neighborhood of $5-$10, give or take, if in good condition.