By most standards, Art Whitney wasn’t among the great ballplayers of his era. Now, he was good enough to last 11 major league seasons, so he wasn’t an entire slouch. But superstar he wasn’t.

Whitney did go on help the New York Giants win championships in 1888 and 1889. And defensively, he was among the better fielding third basemen, leading the league in fielding percentage three times (he also accomplished the trick once as a shortstop). But he was a below average offensive player with a career batting average of only .223, which drastically limited his value. 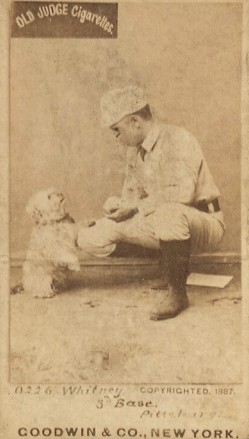 Whitney, like many players in the late 1880s, appears in the Old Judge set. And like plenty of others, he appears in the set on more than one card. The N172 Old Judge set is one of the most impressive pre-war sets of all time and it may even be the greatest baseball set of all when you consider its prestige, size, and wealth of talent.

The T206 set tops the list for me but, realistically, that might be the only issue that does in terms of baseball cards. Ask me another day and maybe the 1933 Goudey set does, too. But you get the point – it’s simply a tremendous set.

At any rate, while Whitney’s cards are mostly considered commons, one of his N172 Old Judge cards certainly is not. The card in question pictures Whitney with a rather important guest — a dog.

The dog, as you might suspect, is unnamed. But, if you’re a dog person (or, frankly, even if you’re not), you don’t need me to point out the undeniably cool factor this card possesses. Whitney is bent down and appearing to virtually hold a conversation with the dog, who looks completely engaged.

Now, there were lots of interesting cards in the set. Most were standard baseball cards with players in a variety of poses. But this certainly isn’t the only oddball type. The interesting part, though, is that there appears to be a bit of a story behind the card.

Robert Edward Auctions provides a bit of context on the apparent backstory:

This photograph was apparently taken and included in the Old Judge set as a joke. Whitney was notorious for switching teams. Rarely has one player jumped from team to team as much as Art Whitney.

So if this card isn’t a common, how much is it worth?

Well, typical low-grade Old Judge commons, including Whitney’s, start around $75-$100. But, even in low-grade condition, this one with the dog usually starts around $600-$700 if you’re lucky. Buyers shouldn’t take that has a hard and fast guideline. While they have sold in that price range, other low-grade examples have easily topped $1,000. Prices on it are a bit all over the map so interest seems to come and go a little bit for the card.

As with most Old Judge cards, the clarity of the image is often a big factor. Many Old Judge cards have faded pictures and those, even if the rest of the card is in better shape, are often tougher sells.