A history of the popular Goudey and World Wide Gum cards

Goudey cards are among the most popular pre-war baseball cards around. Issued mostly in the 1930s, the cards helped usher in a new era of collecting as gum cards began to be a focal point for collectors.

Goudeys weren’t the first candy cards, of course. While scarce, candy cards featuring baseball players actually were printed as early as the 19th century. But most 19th century cards featuring real players were tobacco issues, as were most of the early 20th century cards. Candy cards were popular shortly after that, though, and in the 1930s, it was Goudey’s turn to take over. Others such as National Chicle and Play Ball gave Goudey competition. But there’s no doubt that Goudey ruled the decade.

The company produced a lot of different types of cards. Some of those, like the multi-sport 1933 Goudey Sport Kings set, were important issues. But for the purposes of this article, we’re going to take a look at the most popular issues — the baseball sets.

The company’s first baseball cards were printed in 1933 and it was a popular one. In fact, the 1933 Goudey set is considered as one of the top sets of all time. Some cards, like this Babe Ruth (left), are among the most iconic of the decade.

But those cards were issued in America and Goudey wanted to think bigger than that. Also that year, the company operated the World Wide Gum Company in Canada and they produced a very similar set. The cards utilized many of the same of players and pictures. The primary difference was the backs and also the checklist, which was much shorter in Canada.

The major conspiracy of the 1933 set, of course, is regarding card No. 106, which pictures Nap Lajoie. The card was not issued in 1933 and that sent collectors looking for it everywhere. Some of those collectors wrote to the company and in 1934 Goudey printed the missing Lajoie card, which was not previously distributed, and sent it to those asking for it. Most believe the lack of a No. 106 was intentional to keep collectors buying cards in hopes of finding it.

Babe Ruth was an early focal point for the company. But his career was starting to wind down and, for whatever reason, the focus shifted to Lou Gehrig in 1934. Most 1934 cards featured a banner at the bottom called, Lou Gehrig says (the highest numbered cards have commentary from Chuck Klein instead). Backs of the Gehrig cards included a supposed commentary from him on that particular player.

Gehrig, like Ruth, was a legendary player, so using him as the face of the cards made sense. But interestingly enough, Ruth was omitted from the 1934 Goudey set entirely. That was strange since Ruth was not only the game’s greatest player but he also had four cards in the 1933 set a year earlier. Muddying the waters was that Ruth was featured in the 1934 World Wide Gum set in Canada.

The reason for Ruth’s exclusion remains one of the great mysteries in pre-war cards and it may never be confirmed. But that isn’t the only strange thing about the 1934 sets. Those cards used most of the same players and pictures as found in the 1933 issue. Overall, it was just a pretty lazy effort. 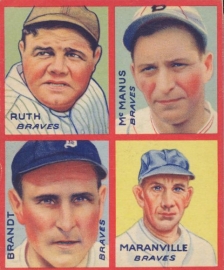 In 1935, Goudey again printed a card set and the good news for collectors is that Ruth returned (Gehrig, however, did not). And again, it used the same players and pictures as found in the 1933 and 1934 sets. However, this time the set was printed with a twist. Four pictures/players were issued on each card and puzzle pieces were printed on the backs.

At first glance, many collectors might look at the short 36-card checklist and think Goudey was doing its consumers a favor by not having to buy many cards. But the company printed puzzle pieces on the backs, creating numerous combinations for collectors to have all of the different puzzles and card fronts. In all, there are a total of 114 cards needed for the full master set.

That wasn’t all, though. Goudey also tried its hand at expanding with a new inventory of items. Also that year, they produced a game called the Knot Hole League Game, which considered of pictureless cards with printed game actions.

1935 also saw the distribution of a set of premiums (R309-2). These photos were available to customers exchanging certain wrappers for them. They are sometimes called cards but are actually small photographs. Shown here is one featuring Hall of Famer Mel Ott. Interestingly, the company didn’t print any separate Canadian issues under the World Wide Gum label.

More Experimenting and … to the Movies

1936 through 1938 saw Goudey employ a similar strategy with various offerings.

In 1936, they also printed a small American set of traditional trading cards. But while the 1936 Goudey set included only 25 cards, Goudey’s World Wide Gum set returned with a major 135-card release. Both sets were black and white and the World Wide Gum issue is significant as it included what has become the top rookie card of Yankees Hall of Famer Joe DiMaggio.

Pictured here is the DiMaggio as well as a 1936 Goudey card of Hank Greenberg, arguably the top card in that set.

But cards weren’t the only thing the company produced those years. In 1936 and 1937, Goudey and World Wide Gum printed premium photos in both the U.S. and Canada. Spread out over five series’ and two years, this is a rather large issue with approximately 250 photos between the five combined types offered. 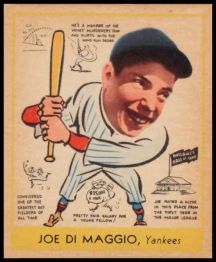 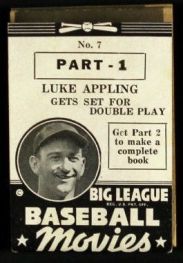 While a traditional card release wasn’t offered in 1937, Goudey returned to that type of product in 1938 with another well-recognized issue affectionately known as the Heads Up set.

Now, not everyone enjoys these unique cards that featured real player heads on cartoon bodies. But as I wrote before, they are certainly well-known. For whatever reason, Goudey seemed to tie these to the 1933 set. We know that because the card numbering starts with No. 241 while the 1933 set ended with card No. 240. Why Goudey did that remains a mystery, though a few theories abound.

Goudey also experimented with some flip book movies in 1937 and 1938, which were somewhat popular around that time.

These miniature books featured players in action with a particular play being shown when a collector thumbed through the book. These aren’t regular cards, per se, but are popular and still collected today.

Goudey and World Wide Gum were still printing issues by 1939 but things were kind of in disarray. And it wouldn’t be long before Goudey would stop producing cards altogether.

In 1939, each company only printed a premium of small photos, as they had done in other years. Goudey’s issue was known as R303 and are often called the ‘How To’ series because they gave some tips to collectors on how to play the game of baseball on the backs. There are a few different types of R303 photos, though they are generally somewhat similar.

World Wide Gum’s 1939 offering, known as V351, was similar to one of the R303 types. The primary difference between the two is that the Canadian World Wide Gum photos are a bit smaller in size and have a smaller checklist.

After printing so many different types of items in previous years, why the shortage? That’s tough to say but it is worth noting that World War II is recognized to have begun in earnest in 1939. Distractions, even though the U.S. was not really engaged by then, may have surrounded Goudey.

However, the company would produce one more issue after taking a break in 1940. In 1941, they issued a 33-card set featuring baseball players. While the issue had only 33 players, many more exist as players are pictured against different colored backgrounds.

The 1941 Goudey cards are a bit different from their other sets and they are clearly a lower quality in general. The cards pictured black and white players against solid colored backgrounds.

While it is a short set, it is not a cheap one to assemble with prices for half decent commons going starting around $50-$75.

The cards are not wildly popular because there were many problems with them. Part of that is probably because of the design. Another issue is that the cards were not printed in nearly the same quantities as Goudeys older cards because of the cardboard shortage from the war. The quality was also lacking as many of the cards are miscut and simply not all that attractive.

Another big issue? The set did not feature many big names. Collectors will find a few recognizable names, including Hall of Famers Mel Ott and Carl Hubbell. Besides those two, however, it’s a collection of lesser players. Still, the set was distributed and having any cards at all during a major war was probably welcomed by collectors with open arms.