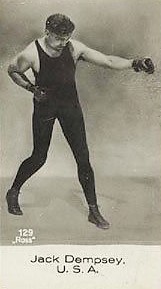 The 1930s Cloetta Ross cards are an interesting series. This was a large multi-sport candy set believed to be produced out of Sweden. The exact year of distribution is a bit muddied but they are typically called either a 1930 set or a 1930s issue.

Many big names are found in the set. For American collectors, the cards of most interest might be the boxers as Jack Dempsey, Gene Tunney, Max Schmeling, and others, are included. Other sports, however, such as ice hockey, tennis, soccer, track and field, and wrestling, are covered here, too.

The cards are small, black and white, and pretty unique with a large blank area at the bottom. Cards also have numbers on the front.

Of great importance is the confusion surrounding the set. That’s because there are actually two different ones.

The set is sometimes called Cloetta Ross while other times, it is simply called Cloetta. The confusion around those names is easy to understand.

Most of the cards can be called Cloetta Ross cards. The ‘Ross’ is added because those cards have the name ‘Ross’ in small letters on the front. However, a much scarcer type of cards exist that do not have that name. 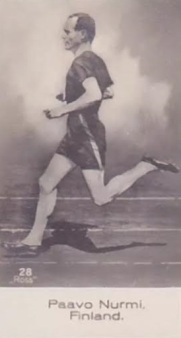 Here, for example, are two cards featuring the great distance runner, Paavo Nurmi. Nurmi is a Finnish distance runner with that is regarded as one of the early greats in that sport. He won a total of nine gold medals, appearing in the 1920, 1924, and 1928 Olympic games.

Nurmi has both types of the Cloetta cards. The card to the left is missing the Ross and would be the standard ‘Cloetta’ card. Those cards, as you can see, have the card number in the bottom border area.

Meanwhile, Nurmi’s Cloetta Ross card is slightly different. This one has the card number and the word ‘Ross’ in the picture portion of the card. As stated, this is the type that is much easier to find.

Interestingly on the Nurmi Cloetta cards, we see the non-Ross version seems to be whited out. That would possibly indicate a couple of things. For one thing, it’s possible that the Ross cards were printed initially. However, it should be noted that other non-Ross cards do not always exhibit this kind of feature. Thus, it could also be possible that Nurmi’s could simply have been an error of sorts.

Backs of the cards are slightly different but very similar. Each features a brief ad for Cloetta with only minor differences.

The other notable thing, as Nurmi’s card demonstrates, is that the types do not have the same number. That is what has thrown collectors off previously and, safe to say, hardly any checklisting examples on this front can be trusted. Some checklisters unfamiliar could be basing their lists off of both versions and mixing them together.

I have begun checklisting the cards I have seen to date on my set page for this issue, but because the non-Ross cards are so rare, finding an accurate checklist for that set may prove to be difficult.

But beyond that, collectors should realize that there are two different sets for this rare Swedish issue and that one, the non-Ross version, is considerably rarer.

Because the non-Ross Cloetta cards are so rare, there are several mysteries that remain unsolved to me.

Until I see more of the non-Ross cards, these questions are going to be remain unanswered.

So what’s the pricing like for these sets. Compared to other American sets, fairly low. For starters, here aren’t any baseball players here, which would be the draw for most. And collectors of boxing, tennis, soccer, etc., while present, are limited.

The boxing cards will generally have the most appeal and even those aren’t too pricey. Jack Dempsey, for example, can be had for around $20, which seems criminal given the rarity of this set.

None of this is to suggest that the boxing cards are the most expensive. Some collectors of these types of sports could very easily get into bidding wars and drive prices up. Set collectors, for instance, would almost certainly pay above market prices when needed. But in general, most of these cards can be found in the $5-$10 range in lower grade condition.