When a Pre-War Collector Goes Rogue

Finding a pair of unique (and newer) cards

For nearly five years now, I’ve been pretty much exclusively collecting pre-war cards. After a long hiatus, I got back into the hobby around ten years ago. I picked up with collecting almost all vintage stuff from the 1950s and quickly went older after that.

I dove into the 1951 Bowman set … then the 1948 set. Then the 1933 Goudey set. After fiddling around with some other vintage stuff, I found my first T206 card and the rest is history from there.

With very few exceptions, I’ve been buying only pre-war. Earlier this summer I got into wrestling cards, which has been a nice diversion but in terms of my main sports cards, I haven’t really gotten off the pre-war path.

So how’d I get my start in this crazy hobby? Well, in 1986, I got my first pack of cards – a Topps rack pack. I was hooked soon after. By 1987, I was collecting my favorite player, Dwight Gooden. My first real purchase was his 1987 Topps card, which cost me something like $1.50 or so.

As I got older, cards became more complicated. I was worrying more about what a card was worth instead of just enjoying the card for what it was – a stupid piece of cardboard with some guy’s picture on it. Soon I wasn’t collecting Doc much at all. Not because I didn’t like him as a player anymore but because his cards, well, weren’t worth very much and there was shinier stuff to be had.

I got out of cards right around the crash of the mid 1990s and mostly stayed out until about ten years ago. Now, mostly collecting vintage, Gooden cards were the farthest thing from my mind. But every time I saw his 1984 Topps Traded rookie card, I still thought it was one of the coolest things around. The card in its raw form was and is pretty cheap in the $10-$20 range. Still, one thing I always kind of wanted was a PSA 10 of it. I just didn’t care enough to do anything about it.

Now, as a traded issue from the 1980s, there are a good number of high-grade cards out there. Those often sat untouched and, as of now, there are about 325 PSA 10s of Gooden’s rookie graded by PSA alone. It’s just not a terribly rare card and I basically decided it wasn’t worth the trouble.

Acquiring a Pair of (for me) Holy Grails

I think part of my fascination with the card was that I’d never owned one. As a kid, I couldn’t afford it and, when I could, I didn’t care.

But last week when I was putzing around on COMC finding some pre-war cards, I saw some modern stuff. Nothing that I was interested in, mind you, but having some recent conversations about Gooden led me to look up his cards. In turn, I went to eBay to see if any PSA 10s were around and, voila.

I’d settled on one pretty quickly and had decided to buy it. But then, something caught my eye. There were autographed Gooden rookies out there. I don’t know why the thought to look for one of those didn’t cross my mind before but then I decided to take a look at those.

And then I saw it. The (by PSAs definition, anyway) perfect card – a Gooden PSA 10 rookie with a PSA 10 autograph. While the PSA 10s were indeed plentiful, I couldn’t imagine autographed 10s on a PSA 10 were – and they’re not. So far, I’ve found three online.

It was expensive and, despite one selling for a little more than I paid, likely above a true market value. But I splurged and went for it, anyway. Why? It’s pretty simple. This was a chance to buy what I perceived as the card I’d always wanted. Unlike those buys as an older kid, this was the opposite. I was buying something I wanted, placing my own value on it.

Happy with my new purchase, I was ready to drift off back into the land of pre-war cards but then eBay’s pesky ‘People were also interested in’ popped up and showed me something else. 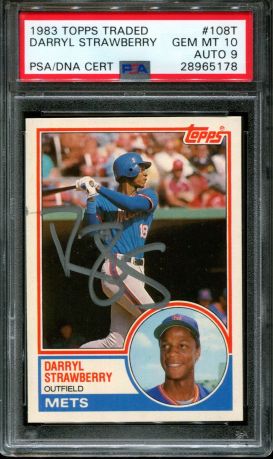 Now, Straw wasn’t on the same level as Gooden for me. But if I had a second favorite player on the Mets, he was easily the leader in the clubhouse there. And I always thought the Strawberry card was cooler to look at.

This card was a PSA 10 but with only a 9 auto as a trace of it spilled into the border. Sadly, I checked the completed auctions and, sure enough, there was a PSA 10 with a 10 auto that had sold already. But after some back and forth, reluctantly, I bought this one, too. In a few clicks of a mouse, I was back into the world of modern cards.

It might seem that way but I can safely say I’m done with modern baseball for now. Maybe I revisit the topic down the road but these were more driven by cards I admired as a kid than they were any real desire to get back into modern cards.

Modern cards are a rat race. And even getting back into the junk wax of my childhood is just something that makes me more nauseous than excited. I can’t express how little I’m interested in the thought of collecting newer cards again. Like I said, maybe that changes later. But for now, I’m content with my pre-war and newer wrestling card purchases I make from time to time.

Still these cards are a fun trip down memory lane and I can honestly say they’re two of my favorite cards in my collection just for the nostalgia.