Even more than 100 years after his career began, Cobb is still held in high esteem as a player. But as the E120 American Caramel set proved, not even Hall of Famers were immune to the horrendously bad proofreading of early baseball cards.

Pre-war baseball cards, if you haven’t noticed, have their fair share of typos. Baseball cards weren’t seen as much more than a novelty back then and simply weren’t taken too seriously. Sure, highly detailed artwork was used on some big sets like T206. But plenty of shortcuts were taken in other sets and, more to the point, grammar was not something highly checked back in the day.

One of the worst error cards I’ve seen is actually on a Ty Cobb card. I’ve always found the error to be particularly amusing because, who can’t spell ‘Cobb?’

Apparently someone unfamiliar with the game of baseball in the 1920s had a hard time with the name.

The 1922 E120 American Caramel set is where this unmistakably bad card is found. The front features a nice fielding pose of Cobb. That was refreshing because many Cobb cards are either portraits or him wielding his menacing bat. Even the T206 set, which featured four cards of Cobb, couldn’t be bothered to include a fielding card of the Hall of Famer (he has two portraits and two batting cards).

To get a fielding card of Cobb was a nice change of pace. It would be an otherwise perfect card, had Cobb’s name not been spelled ‘Cob.’

That’s right. One of the game’s all time greats has his famous last name spelled sans a single but oh so important ‘b.’

From Bad to Worse 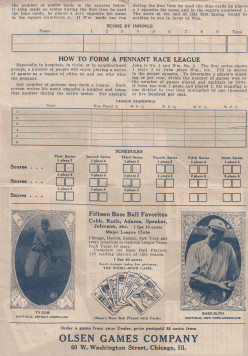 So the card had a typo. That’s a big enough deal as it was for as important as this set became, right? Unfortunately, the embarrassment didn’t end there.

As I mentioned, Cobb was one of the most important players at the time. Whenever baseball was featured, there was a half decent chance Cobb’s name would be included. At the time, Cobb’s only real rival for the spotlight was probably Babe Ruth.

In the early 1920s, Ruth was just hitting his stride. He clubbed a then record 54 home runs in 1920 and followed that up with another record (59) in 1921. Ruth and Cobb were often featured together and that was true in the advertising of this E120 set.

The pair were featured in this advertisement of the set (more specifically, a blank-backed version) in the rare 1922 Olsen Game set. It was included with the game and advertised how collectors could get their hands on a set. There, front and center, is the Ruth card as well as the Cobb card with the typo.

Now, while the advertisement here is for the version of the set that came with the 1922 Olsen Game, my guess is that similar ones were certainly circulated in all sorts of places. There would have likely been ads for the American Caramel set and other ads for other companies advertising the likely blank-backed cards for this specific promotion. As a brief aside, the E120 cards are found with blank backs and it is believed that they were distributed by many different companies, similar to what occurred with the M101-4 and M101-5 Sporting News/Mendelsohn cards. Many blank-backed cards of this set (classified as W573) are known as are a few rarer types with specific company names printed or stamped on the back.

These almost certainly would have been advertised a great many places and there’s a really good chance the Cobb card would have been featured as it was in this ad. None of this, of course, even speaks to other types of advertising, such as posters or signs promoting the set.

So, is the worst pre-war typo of all time? I’m not sure but it’s got to be up there. This isn’t merely a typo on a name in an era where many of those were made. The error is particularly bad for numerous reasons.

First, it’s Ty freaking Cobb. Not only was Cobb one of the best players of his day, but his name just isn’t that hard to spell. Red Schoendienst this is not. There should be no screwing up this card, even by the interniest of interns.

Second, it’s on the front of the card. Sure, sometimes you can get away with spelling errors or statistical mistakes being made if they’re on the back of a card. But on the front? That’s extra bad.

Finally, the error was made in one of the most high-profile pre-war sets around. The E120 American Caramel set sort of helped to usher in a new trading card. Instead of smaller, colorful lithographic cards, these were larger cards that featured pictures of real players. The E120 set, in particular, is one of the most popular caramel sets of all time. If this was some obscure set, it’d be one thing. On the landmark E120 issue? Quite another.

‘Worst ever’ is always a subjective term, of course. But in terms of bad error cards, this has to rank among the worst.