When most collectors think of 1800s baseball, they generally think of some of the game’s biggest stars, like Cap Anson, Tim Keefe, and King Kelly. But while those players are certainly littered throughout 19th Century issues, one of the more unique trends in the 1800s was to actually include women in baseball card sets.

The idea to use women on cigarette cards, of course, isn’t a surprise. Sex sells and that’s true whether you’re trying to move tobacco or cars. But what was kind of fascinating is that women were routinely pictured as actual players even though women’s baseball teams weren’t (at least not in widespread fashion) really a thing back then.

What’s more is that most of the women’s baseball cards weren’t really produced in large numbers. They are often very difficult to find and, as a result, pretty expensive with many of them topping $100 for even low-grade examples.

Here’s a look at some of the earliest baseball cards featuring women.

Several women appeared in a variety of baseball trade issues. Dates on these often are unknown but most were produced from the late 1870s through the 1890s. One rare issue was the Duke’s Cameo Studies, believed to have been produced in the 1880s.

Classified by Frank Keetz as H804-39, this unique set featured cards printed with white ink against black backgrounds. Silhouetted female players are the subject and you simply don’t see these cards around often.

Backs of the cards were interesting. They featured an advertisement for the Cameo Studies brand and talked about how other, older cigarette makers were copying their product.

The cards went on to mention that those brands were essentially stealing the Cameo sliding box. Cameo notes, though, that those brands still have more work to do in improving the quality of their paper, tobacco, and workmanship. Cameo cigarettes were sold ten for five cents or 20 for ten cents. 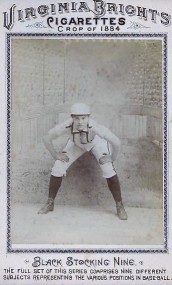 These cards are actually oversized cabinet issues. Keetz cataloged these sets as H807 cards and they are two distinctly different sets.

Both were made by Virginia Bright but the subjects had different pictures/uniforms. One set calls the women baseball players the Polka Dot Nine while the other calls them the Black Stocking Nine. As you might imagine, the first set features women with polka dot apparel and the second has women with black stockings. Each set includes a total of nine cards.

The cards have the phrase, ‘Crop of 1884’ on them, leading many to believe they are definitively an 1884 set. However, there is some question about that as they may have actually been cards that were printed later.

Both sets were produced for Virginia Brights cigarettes. In addition to the ones shown here, other types of ‘Crop of 1884’ sepia cabinets have been spotted as well. 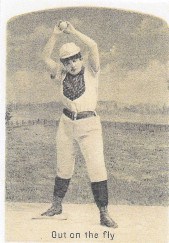 These cards are exceedingly rare and are not easily found. In fact, Keetz found only two of these cards in his checklist. I recently discovered a third, growing the set slightly, but it remains an elusive set.

The cards look familiar to other sets that feature women with polka dot uniforms. That was a popular trend and the same or very similar images were used between companies in a variety of sets.

This set is simply called the Girl Series Trade Cards and were cataloged as H804-41.

The exact date of this series was unknown and even a complete checklist is not known. While there are at least three cards, that is almost certainly not the entire issue. If it followed other women’s sets, it could have as many as nine cards.

Trade cards in this set are very difficult to find.

I’ve grouped these three sets together because, well, they all sort of belong together.

Previously, I broke down these three sets and how they’re all related. If you’re into that sort of stuff, you can read it here. Otherwise, here’s the tl;dr version.

There are several different types of N48 Dixie and N48 Virginia Brights cards. Many of the cards feature the same pictures of women or very slight differences. In addition, one of the Dixie types is the same issue as the N508 Sub Rosa cards, only with the Dixie or Sub Rosa names.

Going even further down the rabbit hole, Burdick actually (correctly) cataloged the Dixie type that matches the N508 Sub Rosa cards as N508 cards. However, over time, confused collectors have referred to the Dixie cards as N48 either because they didn’t know any better or because they wanted to group them together with the other Dixie cards.

These cards are rare and there are quite a few in all across all of the different types, making it incredibly hard to put together even one 9-card set in any of the various types.

That, of course, made perfect sense. While that style of card was seen in the 1880s from companies like Old Judge, by the late 1880s companies such as Allen & Ginter were producing color lithograph cards like these.

These cards are actually three separate sets. One featured calendar girls for various months of the year while a second featured women in all sorts of non-sports capacities in various occupations. The third is usually the one of most interest to collectors as it features athletes.

Headlining the sports cards are women depicting baseball and football players. Other sports include things such as boxing and tennis. While the Harry Beecher card from the N162 Goodwin Champions is considered the first football card, this one was either produced in the same year or immediately afterwards. While it features a generic woman instead of an actual football player, it remains one of the earliest cards depicting that sport.

Like others presented here, the cards are difficult to find. The baseball one in particular is desired by type collectors and rarely surfaces for sale. 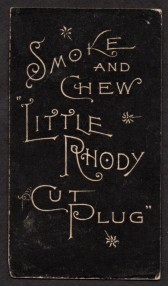 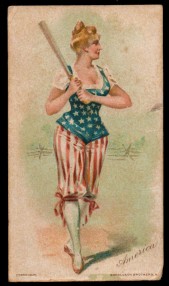 This set includes a total of ten female athletes participating in a variety of sports. The key card in the issue is easily the baseball card, which is also tied to America. Every card in the set was also tied to a different country and baseball was the sport featured for the United States.

The baseball card features a female batter wearing a red, white, and blue outfit with an American flag theme.

Similar to the N285 baseball card, which is the only one of its kind in the set, the America/baseball card in this issue is desired by type collectors. As a result, it often resides in those collections and is rarely offered for sale. 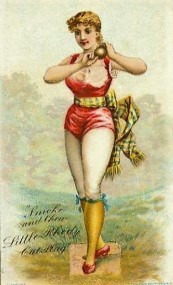 The cards are generally recognized as either Little Rhody Cut Plug cards or Ideal Cut Plug cards. However, the cards featured many different backs and included other rarer backs as well, such as Helmet Cut Plug and Pluck Cut Plug. There are a total of nine in the set featuring women playing various positions.

One quirk is that some of these backs are found with a taped sponsor name over top of presumably a different one. That was likely done if a certain brand was selling a lot of tobacco and quickly needed to secure more cards. Instead of having more printed, this was an easy way to change them. The only taped ones I have seen to date are for Ideal Cut Plug tobacco. That, unsurprisingly, is the most common back in this series.

Dating for the set seems to be all over the place. Some have cited it as an 1880s issue while others state it is from 1890, 1892, or 1894. Schedules on the back that I have seen correspond with the 1894 season but I am unsure if other printings were done in other years with different schedules.