The N48 (and by extension, the N508) women’s baseball cards may be some of the most confusing pre-war issues. In particular, the N48 set is known to have numerous types and thorough checklisting efforts generally don’t exist. Jefferson Burdick essentially punted on the issue in the American Card Catalog, only identifying two types – women with polka dot uniforms and women without them.

I’ve been trying to sort out the three sets for some time now and feel like I’ve gotten pretty close to getting them straightened out. Additional clarification is probably still going to be needed but I’ve personally got a much better handle on the sets.

So what are N48 and N508 cards? Well, if you’re unfamiliar with them, you’re probably not alone. Even many pre-war collectors probably couldn’t tell you too much about them. In short, though, Allen & Ginter’s Dixie Cigarettes and Virginia Brights brands sponsored the N48 set. N508 was sponsored by Sub Rosa Cigarettes. In short, you’ve got three tobacco brands involved here – two for N48 and one for N508. The cards were printed in the mid to late 1880s.

Similar to the famous Old Judge cards, these used real pictures of baseball players. The big difference is that the pictures were women who weren’t really players. They were likely either models or maybe even women that worked for the companies in other capacities.

While the cards don’t feature real players, they are highly desirable. Unlike many of the other tobacco sets, these weren’t likely produced in quantities as large. These cards aren’t entirely scarce but they aren’t terribly easy to find, either. Even in low-grade condition, prices for these generally start around $100.

In all, I have identified five different N48 types. One, Type 4, ties into the N508 Sub Rosa issue.

With that said, here’s a look at each type. 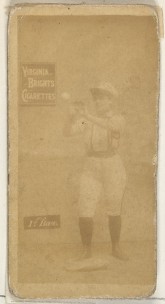 The distinguishing feature here is an additional small black box. This box identifies the woman’s position on a playing field and also includes a very small number inside it.

The pictures between the two brands are either completely identical or have very small differences.

For example, the 1st Baseman pose on the Dixie Cigarettes card is exactly the same as the 1st Baseman on the Virginia Brights card. However, you can also see very slight differences (placement of her lower legs with the socks – picture on the left shows them closer together) so it’s clearly not the same exact picture. A side-by-side look of the two cards is presented here.

A total of nine cards is found in each brand’s set for a total of 18. However, this type is also quirky in that some small variances have been found in it. Cards for two positions in the Virginia Brights set are close but not identical. 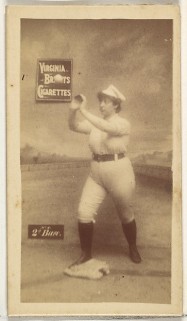 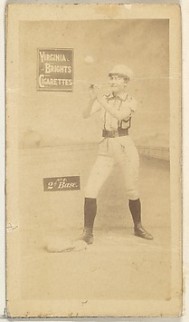 A Variation within Type 1

As you can see, the pose is the same but the women are not. Virginia Brights took great care to get the same exact picture but used different models.

What this means is anybody’s guess, really. The cards could be considered a variation or a sub-type could possibly be developed here if the other cards all have slight variations such as these.

Therefore, while 18 cards can be considered in this type, a master checklist would include more.

The next type of cards in the N48 set are cards that utilized similar pictures but no position captions. Instead, these cards have a large number printed on them with no additional information. As indicated in the title, these cards have borders as well.

We’ve again got a likely total of nine Dixie Cigarettes cards and nine Virginia Brights cards, giving us a total of 18 in this type.

Not much to point out with these cards. They feature women in different positions but just without the captions to explain where on the field they may be playing. While I believe there to be nine for each brand, to date, I’ve identified only eight of the Dixie cards and five of the Virginia Brights cards. However, based on the theme of nine known cards in other subsets and not seeing any numbers above No. 9, my belief is that this type is capped at nine cards for each brand.

One note is that, unlike Type 1, the pictures aren’t as similar between the two brands. And an interesting side note is that the No. 4 card for the Virginia Brights set has a small backwards ‘4.’ That card is pictured here.

Type 3: N48 Dixie Cigarettes and Virginia Brights with Numbers and without Borders 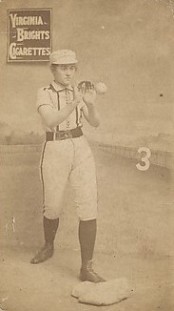 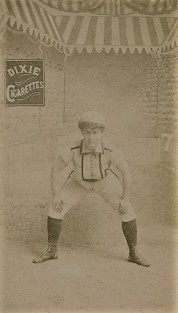 These cards are basically the same as Type 2 but without borders. For a while, it was assumed that these could merely be trimmed cards. That, however, is not the case. We know that because I have found two cards that have the same number but are entirely different pictures.

By way of comparison between the two brands, there’s an interesting aspect of this type. The Dixie Cigarettes set uses either the exact same or similar pictures as the cards in Type 2. The only main difference between those are the presence of borders. The Virginia Brights cards, meanwhile, don’t follow that pattern. At least not entirely.

We know that because of my aforementioned note about with two card numbers using different pictures. 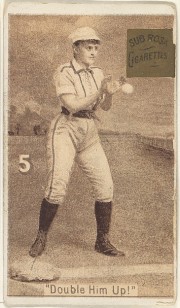 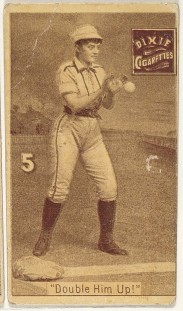 This is one of the more interesting types in the series. I say that because it’s one that has been misclassified.

In his book, Jefferson Burdick actually identified these as N508 cards with the Sub Rosa set. His explanation there reads, “Women Baseball Players, Sub Rosa, Dixie, numbered.” However, today, they are seen as N48 cards.

We know that Burdick surely intended these to be N508s because the cards not only have the exact same design, but use the same pictures. They are identical to the Sub Rosa cards but only have the Dixie Cigarettes name instead. Burdick’s collection at the Met Museum also continues to classify these Dixie cards as N508s.

So why do we call them N48s? Beats me. My guess is that someone figured they should be classified with the other Dixie cards in N48. That makes some degree of sense, but is still kind of dumb. For example, look at the Piedmont or Sweet Caporal cards in the T205 and T206 sets. We consider those to be T205 or T206 cards and kept them separate there because they were clearly part of the same set. Why we don’t do the same with these Dixies and the Sub Rosas is beyond me. But if you’re looking for the true classification for these cards, it’s certainly N508 and not N48.

These cards are one of the easiest to distinguish between the other types. Jefferson Burdick thought so, anyway. As stated earlier, he considered there to be only two N48 types – one with women in polka dots and one without. That was probably too loose of a segregated effort but point taken.

These cards featured women in various polka dot apparel. Another way to identify them is the large Virginia Brights name at the bottom.

These polka dot pictures were popular, as others in the N48 set were. You can find variations of these polka dot clad players in Virginia Brights’ Crop of 1884 Polka Dot Nine cabinets set (categorized by Burdick as H807-2). That set had the same idea with female players in polka dot clothing and, like these, had a written card number on them to help collectors keep them apart.

There are nine known cards here.

There are surely some more mysteries to be found in the N48 set. I personally want to try to sort out the variations of the Virginia Brights cards found in Type 1. But I think we’ve got a much better understanding of the set today.