For years, the trade card set, ‘An Accurate Barometer’ has been a pretty common issue. The more commonly known cards among sports card collectors are the two featuring a boy with aspirations of playing a game of baseball. A third baseball issue without the ‘An Accurate Barometer’ tag but with the same design/layout exists as well. Some other non-sports cards are also found in the set, though.

While perhaps less known to sports collectors, though, that isn’t a revelation since those cards have been discovered for some time.

What I haven’t previously seen, though, is an indication that these were anything but standard trade cards – advertising cards used to promote various businesses. In the past, the cards have been found blank or with an advertiser name printed on the front or back. Now, though, there’s at least one company that used the cards as an insert. 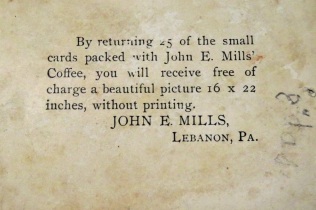 I recently stumbled upon acard with a back from John E. Mills, apparently some sort of coffee manufacturer in Lebanon, PA. This back, for the record, was found on the winter scene card titled, ‘Cold and Clear no let up’ and depicts presumably the same boy as shown in the baseball cards all bundled up for a cold day.

The card states that by returning 25 of the small cards packaged with John E. Mills’ Coffee that the consumer would receive a free, large 16″ x 22″ picture. The card goes on to call that picture, ‘without printing,’ further deepening the mystery.

Because the ‘An Accurate Barometer’ cards all had printing on them, it leads me to believe that the larger picture would be one of the pictures used on the Accurate Barometer cards – not some other random picture. That, of course, means that there could be larger premium items of these cards floating around out there, which would be an exciting discovery (particularly, the baseball cards). Unfortunately, I have yet to see these surface yet.

Not much is known about the John. E. Mills Coffee Company. However, through an old newspaper, I was able to find verification that such a company did exist.

This article from Mills’ hometown Lebanon Daily News states that he, his wife, and his son were nearly asphyxiated in an accident in their home through a gas leak. They list his physical address of 15 Spring Street and his son’s name as John, Jr. In the article, Mills is called out by his full name with middle initial and called the ‘coffee roaster,’ leaving no doubt that it is him.

Here is another article from that same paper that mentions Mills’ coffee business, too. Unfortunately, finding more than that has been incredibly difficult.

The discovery of the Mills card may not be an entirely new one to the hobby. I have not seen one before but others surely exist. Still, they appear to be rare compared to the other non-Mills cards in the set. Part of that likely has to do with the fact that most were either redeemed or the John E. Mills coffee company was so small that perhaps many were simply not printed.

More important than their rarity, however, is that we now know the cards to have also been used as inserts and not straight trade cards handed to customers. It will be interesting to see if any of the larger pictures as mentioned on the back ever surface.