This massive set was produced by Felix Potin, a candy company. The cards included a total of three series and numerous subjects. Most were non-sports figures but many athletes were also included from boxing, wrestling, tennis, soccer, and golf.

In hand, the cards feel much more like small photographs. Like several other international issues, these were printed on thinner stock and they also have a bit of a semi-gloss as well. Backs of the cards are blank and these were often pasted into special collector albums sold by the company. Because of that, it is somewhat common to find these cards with back damage if they were removed.

Unlike many other albums designed for cards in the pre-war era, Felix Potin albums are quite sturdy with a thick cover. Pages inside include places for all of the cards and opposite pages have biographies of the subjects printed in French. Many of these biography names include different spellings of the subjects than what appears on the front of the cards, often leaving collectors to try to figure out which is correct.

Additionally, 500 cards can technically make up a first series. However, a handful of additional cards was seemingly issued after the first 500. Thus, a true first series has slightly more (I have seen 508 and some reports have said 510).

Finally, note that a fourth series exists. However, as that series was issued in 1952 after the pre-war era, it is not featured on this page. Felix Potin also produced a separate set around 1900 called Exposition Universalle. 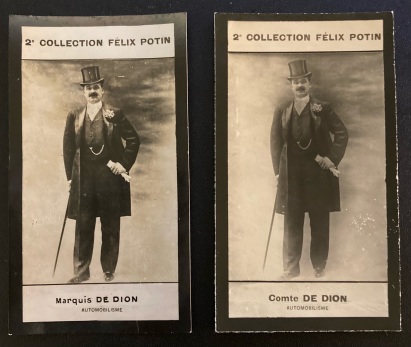 While there are a total of 1,520 recognized cards in the set (assuming 500 in Series 1), a master set would include more. Many cards in the first series issued have picture variations. Sometimes, the same image was used, with an up close version and more of a full body or half body shot. Other times, the picture was a different one entirely, taken at a different angle. There are numerous variations of pictures of subjects that represent different years in which they were printed.

The headers are different on those variations, too. Some say ‘Chocolate Felix Potin’ at the top’ while others say ‘Collection Felix Potin.’ Some have titles at the bottom while others do not. Some cards in that first series have up to three variations.

Additionally, some cards use the same picture but had a name variation, such as the cards shown here for Marquis de Dion and Comte de Dion.

While some may be rarer than others, the cards are all, in general, somewhat difficult to find and it is not clear if a premium is necessarily paid for some.

The set includes many notable athletes, including boxers Jack Johnson and Jack Dempsey, as well as tennis Hall of Famers Bill Tilden and Suzanne Lenglen, among others. Others from minor sports include famous black cyclist Major Taylor and swimmer/surfer Duke Kahanamoku. There’s racing star Ralph de Palma and a notable wrestling card is that of Paul Pons, who is recognized as the first Greco-Roman wrestling champion, winning the title in 1898.

While minor sports, some of these cards can be valuable. In decent condition, the cards of Taylor and Kahanamoku, for example, can easily top $100 with high-grade examples sometimes topping $1,000. Of the major sports, card of Johnson and Dempsey are probably at the top of the list.

Johnson’s card, it should be noted, has an error in the spelling of his last name as it is typed “Jonhson.” I have never seen a corrected version of this card.

Numerous other minor sports are included, such as fencing, cycling, horse racing, track and field, rugby, and others.

In addition to some of the more popular sports, there are many other highly collectable cards here. Non-sports subjects cover just about everything, including politicians, actors/actresses, artists, scientists, doctors, businessmen, and more. Some non-sports cards feature Charlie Chaplin, Teddy Roosevelt and other Presidents, Claude Monet, Renoir, Winston Churchill, and Buffalo Bill.