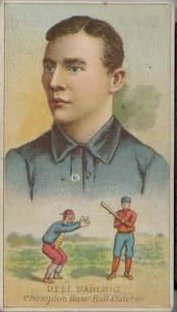 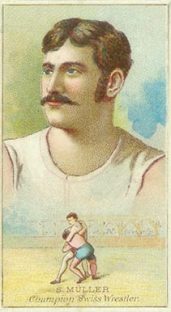 The 1887 N184 Kimball Champions set was a typical 19th Century tobacco card release. Similar to the popular N28 and N29 Allen & Ginter sets and the N162 Goodwin Champions set, it included 50 cards of various types of athletes from around the world. The N184 cards aren’t as popular as those other issues, but are more difficult to find.

Also popular with collectors is the card of rifle shooter Annie Oakley and that of pugilist/boxer Jack ‘Nonpareil’ Dempsey. Wrestling is also featured as a sport in this set.

One unique thing about the set is the inclusion of several child athletes. In particular, a child boxer (Master Ray Perry) and a child club swinger (John Wessels) are featured. In fact, in general, there are a lot of obscure sports featured here, including cannonball catching, checkers, and more.

The cards are well done but aren’t as colorful as some other issues from the same era, such as the N162 Goodwin set. A checklist is provided on the backs of the cards for the sports represented, but specific names of the athletes are not included.

Like the aforementioned N28, N29 and N162 issues, a supplementary premium album was also created for the N184 cards, known today as the A42 Album.

As I wrote here for Sports Collectors Daily, the four players were sort of an odd assortment to be chosen to represent a set that was to feature champions and top athletes.

Tip O’Neill certainly belonged. In 1887, he had one of the greatest all-time seasons of all time, winning the Triple Crown and leading the league in practically every major offensive category. Aside from him, though, the others had relatively modest careers.

In terms of star power, O’Neill is really the only one that belonged. It should come as no surprise that is card is the most desirable of the four.

Most collectors, even those that specialize in pre-war, are unfamiliar with a strange variation that is a part of this set. Most cards in the set have no print at the top. However, approximately half of the cards in the set can be found with nothing at the top or they have the W.S. Kimball & Co. Cigarettes name printed.

Jefferson Burdick outlined this variation in his American Card Catalog. At the time of the publication of that book, Burdick had seen a few names printed at the top over the athlete’s face. By his count, he had seen only 25 total. How many were printed and why they exist is not currently known. But that variant is out there.

Another interesting note is that the set included several cards of female champions in various sports.

The most famous of these was Annie Oakley, a famous trick shooter. But the N184 Kimball set was the only one of the four major champions issues (Allen & Ginter N28/29 and Goodwin N162 being the others) that included more than one female. In all, there are five of them in this set. They included:

Here’s a closer look at the five cards of the female champion athletes.