The W514 strip card set is one of the more significant such issues. It includes almost all of the banned members of the 1919 Chicago Black Sox team, including would-be Hall of Famer Joe Jackson. The lone player not included is Fred McMullin. As I wrote here, today, this remains one of the most popular strip issues.

Unlike some other strip card sets, this is solely a baseball issue. It is completely packed with big names and Hall of Famers. Leading the way is the aforementioned Jackson, Babe Ruth, Ty Cobb, Christy Mathewson, and Walter Johnson.

The cards are a pretty typical strip release. Hand cut, these will usually be found with some sort of uneven edges. The fronts feature a color cartoon image of a certain player and his name, position, and team are printed in the bottom border. In addition, a tiny card number is printed on the front of the player’s card.

A total of 120 cards are in the set, minus a few variations. It also has numerous errors with misspelled names and misidentified players. 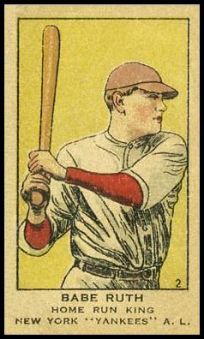 Ruth, as he is in other sets, is the focal point here. Even the appearance of Joe Jackson and Ty Cobb are somewhat overshadowed by his presence.

That would typically be the case anyway but Ruth’s card in this set is extra special. That’s because it is sometimes viewed as his first known card depicting him as a member of the New York Yankees.

Now, Ruth appears to still be a member of the Red Sox here. That’s evidenced by the red sleeves on his uniform. However, the Yankees are the team at the bottom with which he’s associated. The reason for a picture with the Red Sox is possibly due to a late change. Ruth was sold to the Yankees near the end of 1919 and it’s possible that these cards had already been designed by then.

Despite the fact that Ruth still looks like he’s a member of the Red Sox, this is one of his first true cards with the Yankees.

While 120 cards is the number most commonly cited for this set, counting some team variations, there are actually 124.

Three of the four cards with variations feature Hall of Famers. One of those is for card No. 20, featuring Hall of Famer Rabbit Maranville. No. 40, Dave Bancroft, is another as he’s featured with Philadelphia and New York. The last of the Cooperstown Inductees is Hughie Jennings, who is listed as both a manager and an assistant manager.

The last of the four, Bob Roth, is the only player not in the Hall of Fame. He has both Indians and Yankees variations.

These cards are almost always found with blank backs. However, numerous cards are known to exist with various advertisements printed on the backs as well. Those include the following:

Regarding the Barker Bread cards, it should be noted that many are found with the ‘Barker Bread’ name and slogan partially gone. They appear to been glued into an album and may have even at one time mostly been owned by a sole ambitious collector.