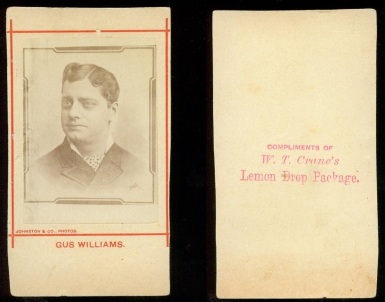 To date, only one of these rare cards are known. This is a card featuring an old major league player, Gus Williams.

The exact time of printing is unknown but because Williams played from 1911-1915 (all with the St. Louis Browns), it is believed to have been printed during that time period.

The card features a black and white portrait of Williams inside of a black frame inside of a red line border. At the bottom on the front in red ink, it states it is the work of Johnston and Company Photos.

The back of the card is blank other than the a purple stamp that exists, reading the card is compliments of W.T. Crane’s Lemon Drop Package. Also notable is that the card is hand cut.

Williams appeared in a total of 410 games with the Browns. He batted .263 over his five-year career, hitting 12 home runs. He had a propensity for striking out as a batter, twice finishing in the top ten in his league in that category. In 1914, he led the entire American League, striking out 120 times.

Other cards could exist but Williams is the only current known card.