The T68 Heroes of History / Men of History set is one of the more popular 20th century non-sports sets from the pre-war era. Issued by the American Tobacco Company in or around 1911, this set of 100 cards (spread out in two series) features iconic figures, including presidents, world leaders, entertainers, military men, inventors, and other notable men and women.

The set is already difficult enough to assemble at 100 cards. It’s not impossible, mind you. However, a few are quite difficult to get your hands on. Additionally, a master set consisting of all of the different back types and ink colors, is insanely challenging. There are more than 550 such cards.

I’m not much of a variation collector when it comes to the likes of ink colors and back advertisements. I suppose if I were disciplined enough to focus only on a few sets, that might work. But I’m constantly working on numerous projects across a variety of sports (and non-sports) and there just isn’t time to chase everything.

But recently, one of the variations in the set caught my eye.

In the grand scheme of things, that doesn’t sound like much of a difference. But if you’ve handled these cards, you know that the ones that measure short are easily distinguished. The most notable feature of them is that the bottom of the white border is usually entirely cut off.

Working on this set in the past year, I’ve gotten very familiar with these cards. I’m nearly complete with one set, missing only four or five cards, and I’ve been buying so many that I’ve got about 2/3 of a second set built, too. Needless to say, I’ve been buying a lot of these cards lately. Shown here is a ‘regular size’ card of actor Sir Henry Irving (right) next to a shortened one (left). 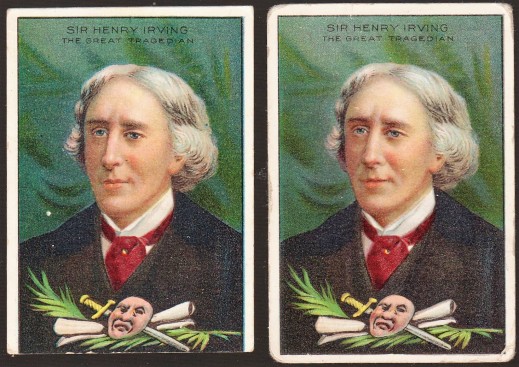 I first noticed one of the short cards and immediately mistook it for one that was trimmed by a collector. But as I began to buy more of them, I noticed others popping up. The ‘trims’ were always at the bottom border and that was the first flag.

A closer look revealed two pretty specific things. The cut at the bottom did not feel like a hand cut. It was not rough or uneven — rather, it felt perfectly straight as if it had been cut purposefully like that in a factory. Second, the cuts on these cards, are all on cards with Miners Extra back advertisements. Miners Extra was one tobacco brand that distributed the T68s in their packages.

I did some digging online and found out that I was not going crazy. Other T68 collectors have noticed this variation and there appears to be a reason for it.

In this thread, two Miners Extra cigarettes packages are shown and one is shorter than the other. The shorter cards, presumably, would have been cut in that manner to fit them into the smaller packages.

This, of course, is somewhat similar to the American Beauty T206 baseball cards. Those cards are narrower than other standard T206 cards as they were required to fit into a smaller package. However, these cards differ from those because some Miners Extra cards are indeed full size. All American Beauty cards, meanwhile, are narrower.

Regarding the pricing for these cards, it does not vary significantly from the regular-sized cards. Other than variation collectors, I would guess that most collectors prefer the full-size cards. I know I certainly do. However, there is not much of a difference in price for them that I have observed. The exception to that would come when some sellers may mistake them for damaged examples and sell them at lower prices.

I won’t be personally be chasing all of the shortened cards. But for those really wanting a deep dive into this set, I can imagine that finding the shorter cards will be of interest. All 100 cards can be found with a Miners Extra back and, presumably, all would have a short variation, too.