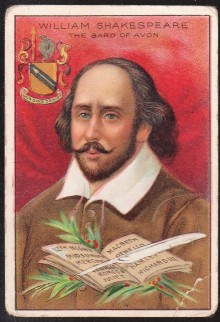 Pre-war non-sports cards are getting hotter — particularly those featuring real historical figures. One set that is repeatedly drawing attention is the American Tobacco Company’s T68 release.

Issued in 1911, the set consists of two series. However, backs of the cards make it clear that this is one big 100-card set as opposed to two different issues. The second series cards state they are numbers 51-100 as opposed to another 1-50 issue. While those card numbers are mentioned, these card do not actually have individual numbers printed on them.

Fronts include fantastic color lithographic pictures with bold colors. The images, like those on American Tobacco Company’s baseball cards, have great detail in the faces. The most popular subjects are easily recognizable merely by the artwork but the fronts include names, anyway. Backs include a biography of the subjects and include tobacco ads for a few different brands, including Royal Bengals Little Cigars, Miners Extra, Pan Handle Scrap, and Natural Leaf Scrap. The Natural Leaf is typically viewed as the toughest back.

The cards are not your typical miniature-sized cards like many tobacco issues. Instead, these cards were a bit larger, measuring 2 5/16″ wide by 3 3/8″ tall, making them just a bit smaller than most modern trading cards.

The somewhat large size of this set means that finding it inexpensively is typically difficult. But individual, low-grade cards with common backs are relatively inexpensive and can be found starting around $5-$10 each. Cards with those tougher Natural Leaf backs, however, start around $25-$35 in lesser condition.

Why is the set so desirable? Primarily its diversity. No, it does not include athletes. But it does include all sorts of non-sports figures including presidents, explorers, world leaders, businessmen, prominent Native Americans, military leaders, authors, and more. The set is a virtual Who’s Who of popular figures over the modern history of the world.

While all of the names in this large tobacco set are significant, as with any set, some stand out more than others.

Among the more important cards are U.S. presidents and the key ones are George Washington and Abraham Lincoln. Other important world leaders found in the set include Napoleon, Alexander the Great, Nero, and Julius Caesar.

Like the card for Hamilton, one card that has gained popularity in recent times is that of P.T. Barnum.

Barnum, owner of the famous traveling circus that bore his name, has few trading cards with his image. While many cards (particularly trade issues and cabinet cards from the 19th century) did picture performers in his shows, Barnum himself does not appear on too many cards. This one has begun to draw interest, partially for that reason.

Two other noteworthy cards are for John Harvard and Elihu Yale, whose money helped to build famous universities Harvard and Yale.

While commons are inexpensive, the bigger names are less so. Cards of Washington, Lincoln, and a few others can start around $25-$35 in decent lower-grade condition.

The set is also known for its prominence of women. That is somewhat interesting given the two names of the sets.

As specified above, the two females in the second series (Queen Elizabeth and Mary Stuart) have the Men and Women of History backs.

Notable women in the larger, overall set include Queen Elizabeth, Joan of Arc, and Betsy Ross. Ross’ card, it should be noted, has a minor typo with her first name spelled as ‘Betsey.’